“Man is not matter; he is not made up of brain, blood, bones, and other material elements.”
– Mary Baker Eddy, Science and Health with Key to the Scriptures

“True prayer is not asking God for love; it is learning to love…”
– Mary Baker Eddy

It has been a week, for sure. There were the shootings at the local mall, which devastated my little community. There was the morning I got a call that Dad was in the emergency  room – I got there in time to be with him when they stitched up his nose, then took him back to his apartment, and got to my school in time to work with my first student. (Dad is doing well now). There was the night of the presidential debates – which was one of the most bizarre and funny – and scary! – spectacles I think I have ever watched. There was the afternoon our dog escaped, plucked one of our chickens (Gretchen has recovered), and terrorized the neighborhood for a few hours until my dear neighbors, Armando and Denice, were able to bring her home to me. And then there was the day this week when I was told to come in for consultation with the family doctor to follow-up on blood work I’d had done for the annual examination I have to take for my husband’s insurance.

The doctor told me during my exam that, unless I got called back for consultation after the results of the blood work, everything was fine. If I got called to return to her office it meant there were concerns. So when I was told I needed to make a follow-up appointment – and none of the people on the phone could tell me why – I, being the neurotic I am, freaked out. Big time.

The follow-up appointment was made for the next day, after work. So I had all day to work myself into a proper dither. The conversation in my head went something like this: “I don’t feel sick. My blood pressure was good. I’m not in any pain… Is it diabetes?! Are there indications of cancer?! How long have I got?!… Well, I’ve had sixty good years. I should be grateful for that. I’ve had a good run…” I started planning my memorial service.

Some still-sane part of me knew I was being ridiculous, and a couple hours into this hysteria I messaged my friend, Patricia, a fellow Christian Scientist, to support me in prayer. Patricia does good work. She reminded me that “FEAR is False Evidence Appearing Real” and, building on a statement from the Christian Science textbook (“Fear never stopped being or its action.”), told me that “Fear never stopped or started or developed being or its action.” I liked the idea of that a LOT. Patricia asked who was doing the “seeing, revealing, unveiling” and then answered the question with that powerful line from Genesis: “And God saw what he had made and it was good.”

At some point during the day – and this was an important epiphany for me – I realized that I wasn’t so much wishing for something physical to be healed in me – that this wasn’t the important thing, really – but that I wanted to learn to love more. A part of me realized that death – if it should make its appearance – couldn’t really stop life or love.

And at some point near the end of the day I finally started rousing myself from the mesmeric scaredy-pants trance that the phone call from the doctor’s office had put me in, and mentally slapped myself awake with this statement from the Christian Science textbook, Science and Health, by Mary Baker Eddy: “Rise in the strength of Spirit to resist all that is unlike good. God has made man capable of this, and nothing can vitiate the ability and power divinely bestowed on man.”

I drove to the doctor’s office, bravely walked in on shaky legs, and was sent back to the doctor. She told me my kidney’s functioning well, my liver’s great, my blood sugar levels are fine, a bunch of other good stuff, and… well… I need to cut back on the butter. And cheese. And eggs. No medications or medical intervention needed.

“I’m not dying?!!!” I asked. She looked at me like I was a little crazy. Which. I guess I was. She apologized that the office people hadn’t given me the answers I needed when I’d called earlier – she said the answers had been available to them, but had apparently been misplaced.

As I left I told the receptionist, “I’m not dying!” She started laughing. I went into the lobby – there was one patient there and he looked like he had a sense of humor – “I’m not dying!” I told him. “At least not today.” And he grinned and congratulated me and told me this joke: A lady asks God how much time she has. God tells her 30 years. She figures 30 years is a pretty long time and she should get herself fixed up. She goes to a bunch of plastic surgeons. As she’s coming out of the last one a car hits her and kills her. When she sees God she says, “You told me I had 30 years!” God tells her, “I didn’t recognize you.” 🙂

Anyway. I learned a lot that day. And I was reminded of things I already knew, but had forgotten I knew – like, I don’t need to look at the results of blood work to know I’m perfect and whole – made in God’s image and likeness.

As I drove home from the doctor’s office I felt God’s laughter in my car. 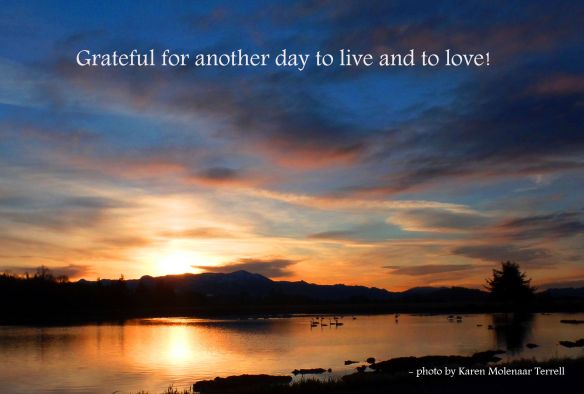 7 thoughts on “Me Being Ridiculous”