Father-Mother is the name for Deity, which indicates His tender relationship to His spiritual creation. – Mary Baker Eddy

I love this video of Mom – it totally captures the essence of who she is – warm, loving, joyful. Here’s Moz, at age 80, singing her unique version of  Mamma Mia:

I couldn’t have been more blest than I’ve been to have this beautiful reflection of motherhood for my mom.

Moz was wise: I remember coming home from school in the first grade, telling Moz about my day. My first grade teacher was not what most people envision when they think of a first grade teacher – she was not sweet-voiced, smiling, or nurturing. She was, to put it starkly, kind of cranky, and didn’t seem to like her students all that much. What I didn’t know at the time was that my first grade teacher had recently lost her son and husband. She was going through some pretty rough times in her life. Mom didn’t know about any of this, either. But when I came home from school, and told Moz that I didn’t think my first grade teacher liked me so much and that she was a crabby old lady, mom’s response was, “Well, Sweetie, we just need to love the hell right out of her then.” Moz didn’t commiserate with me, didn’t call up the school and complain about this teacher – nope – instead she used this opportunity to teach me a life-long lesson about the power of love. I started my Campaign of Love the very next day,  bringing in hand-picked flowers for my teacher, and leaving little notes of love on her desk. And by the time she met with my mom to conference about my progress in school she told my mom how very much she enjoyed me, and how much my kindness had meant to her.

Moz taught us the power that comes with understanding God, Good: When the same little brother was about seven years-old he became very sick. Dad and Mom took him to our family physician who told them that they had a very sick boy – he had mastoiditis. There was a good chance he’d lose his hearing, and he might lose his life.  Surgery would probably need to be scheduled for him. Dad and Mom brought my brother home from the doctor’s office and Mom asked Dad (who was not a Christian Scientist) if she could call a Christian Science practitioner for prayerful support and my dad agreed to this.  I remember lying in bed that night, listening to my little brother screaming in pain in the next room, and my mom comforting him, singing hymns to him. And then – I remember this very clearly – suddenly he was snoring. The healing was that instantaneous. “He’s healed! He’s healed!” my mom called out – the joy in her voice filling our home. And he was, too. The next day the doctor confirmed that my little brother was well. And he never lost his hearing, either.

Moz had been a Music Performance major in college – she had a fantastic voice. She’d been accepted into the Portland opera company when she graduated from college, but she realized that wasn’t the life for her. She wasn’t particularly ambitious when it came to a profession in music.  She wanted to be a mom.  And we got to have her for our mom.  The opera company’s loss was our gain. 🙂

Moz thinks of herself more as a hobbit than an elf – she likes being home, puttering around in the garden, taking care of her cats, llamas,and  goats, and keeping the bird-feeders full for her feathered friends. But make no mistake – if she’s a hobbit, she’s more a “Baggins” kind of hobbit than a regular hobbit. She has had her share of adventures in life. She’s climbed Mount Rainier twice, ran track in college, birthed three children – and all this after she was apparently told as a youngster, following a bout with rheumatic fever, that her heart had been damaged and she should lead a quiet, sheltered life. None of us knew anything about this until last year, when, 80 years after the rheumatic fever, she was told she needed to have open heart surgery.  I talked about that experience in this blog post: https://madcapchristianscientist.com/2012/05/28/the-world-outside-akkima-theresa-and-the-man-in-the-fairy-wings/ . I’m happy to say that now, one year later, Moz has completely recovered from the surgery. Once again she’s puttering around her garden, feeding the birds, singing her songs, sharing her sense of humor and her huge capacity for  love with everyone she meets.

I’m so blest – happy I can still pick up the phone and give her a call and hear her voice. Happy i can still see her and talk with her and be enriched by her wisdom and kindness and humor.

May all who have nurtured and loved and cared for others know how appreciated they are this Mother’s Day. God bless. 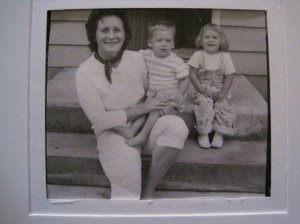 A mother’s affection cannot be weaned from her  child, because the mother-love includes purity and constancy, both of which are immortal. – Mary Baker Eddy

Love, the divine Principle, is the Father and Mother of the universe, including man. – Mary Baker Eddy

2 thoughts on “Happy Mother’s Day to Nurturers and Reflections of Love Everywhere!”