It’s that magical marvelous magnificent season of giving – the season of shameless plugs.

So here’s what I’ve got…

My most recent book is Are You Taking Me Home Now? Adventures with Dad. Those of you who have enjoyed reading the stories of my drives with Dad will probably recognize some of the stories in this book. It has nine reviews now – all five stars!

I came upon two earthworms on the sidewalk today –
their noses suspended in the air, frozen by the heat
of the sun – dried out and stiff
and I reached down and plucked up the first
and carried him to the dirt.
I dug a little hole for him and covered him
with earth – a grave to bring him back to life.
Gently I used my fingers as tweezers and pulled
the second worm from the sidewalk
and lifted him to the moist soil, laid him down,
and covered him with a wet leaf.
Fare thee well, my new friends –
May you revive and spend the rest of your days
happily leaving a trail of rich earth in your wake

“I know!” I said, nodding my head in complete and happy agreement, “But can you imagine what I’d be like without it?!”

He raised his eyebrows and laughed. What could he say? He was looking at a self-centered, moralistic, stubborn idealist who saw everything in terms of black and white. But I could have been worse. I believe without Christian Science I would have been worse.

Let’s get one thing clear from the start: I am not the best example of a Christian Scientist. I’m not as disciplined as I could be. I have fears and worries and doubts. I’m a little neurotic. I am the Lucy Ricardo of Christian Scientists…

***
The second book in the series is The Madcap Christian Scientist’s Middle Book. Here’s an excerpt:

At the age of 51 I went insane. I did not like it so much. But I learned a lot from it…

Yeesh.
***
The third book in the series is The Madcap Christian Scientist: All Things New. Here’s an excerpt from that one:

Two years ago I would never have been able to guess where I’d be today, what I’d be doing, and what new people I would be calling my friends and colleagues. Two years ago my youngest son was close to graduating from high school, my 20-year career as a public school teacher was winding down, and I was looking for a new job and a new purpose to fill my days. Two years ago I was starting over.

It was scary. It was exhilarating. It was absolutely awesome!
***
To find any of these books you can go to my Amazon Author Page. 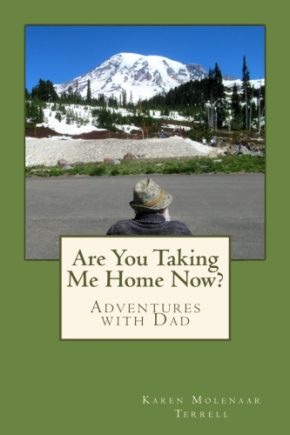 Are You Taking Me Home Now? Adventures with Dad