Skip to primary content
In Flanders fields the poppies blow
Between the crosses, row on row,
That mark our place; and in the sky
The larks, still bravely singing, fly
Scarce heard amid the guns below…
– John McRae
(Originally published on this blog on October 18, 2014)

Saw the movie Fury last night. Really powerful film. Great acting. Beyond gritty. If ever a war movie was an anti-war movie, this one is it.

I woke up this morning with scenes from the movie playing through my head – scenes of death and destruction, blood and cruelty, courage and war-honor. And, as I processed it all, two trains of thought emerged from the smoke.

One of the trains took me to a place of compassion and empathy for the soldiers in every time and every nation who have felt voluntarily compelled, or been drafted, to take up weapons and march to war. It occurred to me that if I had been a soldier watching that movie I might feel a kind of relief in the knowledge that I wasn’t alone – that the “reality” of war is a shared burden of responsibility, memories, and pain by all who’ve lived it.

The other train of thought took me to this place:War has become antiquated. There are no more lessons to be learned from it. It is time for civilization to move on.

Some may say that the cycle of War is never-ending and unstoppable, but I do not agree. Cycles DO stop. I believe there is a natural law – a law of God (Love, Truth, Life) – that pushes mankind towards progress. In Science and Health with Key to the Scriptures (the textbook for Christian Science) Mary Baker Eddy writes: “…progress is the law of God, whose law demands of us only what we can certainly fulfil.”

We’re surrounded by signs of progress, aren’t we? For all that we are bombarded with news of bigotry, sexism, racism, carelessness, greed, thievery, and murder – there is good going on all around us, too – signs of a mental stirring, or what Mary Baker Eddy would call a “chemicalization of thought” that is moving mankind towards decency. When we hear about slavery, racism, sexism, and bigotry – most of us in the United States no longer find these things acceptable – huge progress from just 150 years ago when slavery was still a part of our nation’s culture, or just 96 years ago (in my dad’s lifetime!) when women didn’t have the right to vote or run for public office. .

“…and they shall beat their swords into plowshares, and their spears into pruninghooks: nation shall not lift up sword against nation, neither shall they learn war any more.”
– Isaiah 2:4 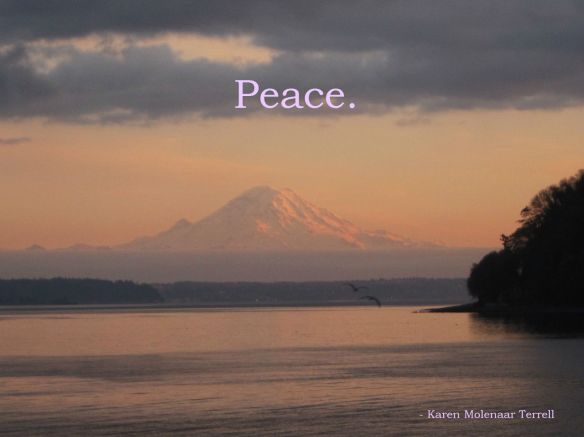