I’ve been traveling and Dad and I hadn’t seen each other for almost two weeks. Dad hears I’m there and comes quickly shuffling out of his room…
Dad: Karen!
Karen: Daddy! I missed you!
Dad: I missed YOU!

We give each other a tight hug and then sit down at the kitchen table to look at cards he’s received over the last couple weeks. After he’s done with the cards, we put his mountaineering hat on his head and Dad and I head out for a drive.
Dad: I’m lucky to have a daughter who takes me on drives.
Karen: I enjoy taking you on drives!
Dad: These drives are the highlight of my life.
I pat his knee and tell him I like them, too.

We drive for a while, past fields and barns, Dad’s head turning as he catches glimpses of things that interest him.
Dad: This is beautiful country.
Karen: Yes, it is. It’s really smokey right now, though, from the forest fires.
Dad: Where are the fires?
Karen: Washington, Oregon, California, Canada. This whole part of the country is burning up…
Dad: Are these fires caused by lightning or are they man-made?
Karen: (thinking) Both, I think.
Dad nods.

Later still…
Dad: It’s good to get out into the real world…

I drive us on back roads and byways and eventually end up at Bayview Park. Dad recognizes being there before. He feels up to a short walk to a bench and we sit there in companionable silence for a while – just gazing out at the tidelands and the seabirds together. Then I ask him if he’d like me to get him a breakfast sandwich and a root beer float and he thinks this is a good idea. So we get off the bench and make our way back to the car – my hand under Dad’s elbow. He is moving at a good clip…
Dad: I’m a spry old man.
Karen: Yes, you are.

We drive to the Sisters Espresso – where Dad decides to get a vanilla milkshake instead of the float.

After he gets his sandwich and shake I ask him if he’d like to come to my house for a while and he nods his head yes. He tells me he’s not up for watercolor painting today, though – “You have to be in the right mood for that.” He sits at the dining room table for a while – finishing his breakfast sandwich and his shake. Scott and Sam the Wonder Dog appear. Sam comes into the dining room to greet Dad. Dad says, “Hi Sam” and reaches out to pet her. “She remembers me,” he says, happy to know she’s not forgotten him.

About half an hour later I ask Dad if he’s ready to go home now, and he nods his head yes. He’s looking a little tired. Getting in and out of cars is hard work when you’re 100 years old. We get him back in the car one more time and take him back to his home.
Karen: I love you, Daddy.
Dad: I love you, Karen 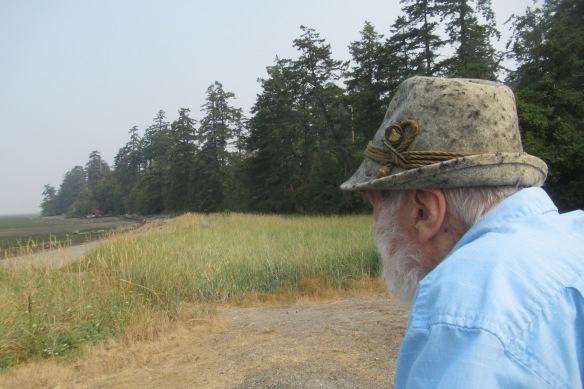