I’m reading a book by Joe Wilcox right now about his climb of Denali back in 1967. He references Mount Rainier several times in his book – talks about how Rainier is often used to prepare climbers for major expeditions and how it’s used to test the strength and ability of climbers to see if they are fit to climb in major expeditions. A lot of expedition climbers are from the Pacific Northwest because of their experience on Rainier. And most folks who come to Rainier to climb it have probably been preparing for that climb for months or even years. It is a big deal. Apparently.

Here’s how I got to climb Rainier: I was working in the gift shop at Paradise – hiking around up there before and after work – my body was used to the altitude. I was sitting outside after work one evening – looking at the mountain. My friend, Perky Firch, who also worked at the Paradise Visitors Center, was sitting next to me. I said to her, “We’re going to climb that mountain.” She said okay. I called my dad to ask him if he could guide us to the summit, and he agreed to be our guide. Two weeks later we were standing on the top of Rainier.

And the sheer naive confidence of my young self – the fearless innocence of it all – astounds me!

What a blessed life I’ve enjoyed! What opportunities came from being Dee Molenaar‘s daughter! I don’t think I fully appreciated that until now.

(Excuse the quality of the photo. I was too lazy to take it out of its frame on the wall.)

Karen on the summit of Rainier – with her father, Dee Molenaar on the left, and her brother, Pete Molenaar, on the right.

Tomorrow will not only be Father’s Day, it will be my dad’s 97th birthday. My dad, Dee Molenaar, has lived a most amazing 97 years. He was born at the end of World War I, was alive when women got the right to vote, lived through the Great Depression, fought in World War II, saw men walk on the moon, and teared-up with pride for his country the night the first African-American was elected President. He has traveled on six of the seven continents (the only continent he somehow missed was Africa),  climbed on the highest mountains in the world (and, with his climbing team, almost made the first summit of the second tallest one), painted paintings, written books, created maps, had his photos published in National Geographic, and hobnobbed with presidential candidates.

He and Mom are currently in the process of moving out of their home of 48 years. This has involved some down-sizing. Last weekend when I was at their place to help them pack up, Dad gave me the little backpack he’d bought in 1973 for his journey to Europe to climb in the Alps. I cannot tell you how much it meant to me to be able to bring that familiar little pack home with me. I always knew I was safe when I was climbing with the man who wore this pack. This is the pack Dad wore to the summit of Rainier when we’d climbed it together in 1977, and the same pack I’d followed up to the top of Mount Baker ten years later. This is the pack Dad wore when he’d taken hikes with my young sons and myself. There are a lot of fond memories attached to that pack.

For now, it is hanging from a hook in our family room. I know it doesn’t have any special magical powers or anything, but somehow just looking at it makes me feel safe. 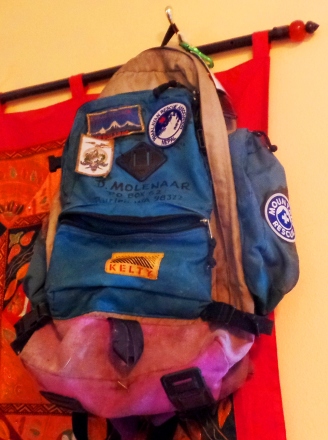 Preface to Dee Molenaar’s book, Memoirs of a Dinosaur Mountaineer

A light breeze came up the canyon and through the pine boughs overhead, and soon isolated white specks began descending. The snowflakes increased and soon we were encompassed in a flurry that blotted out the semi-arid valley far below, and the trail penetrating the pines below the granite walls high above. In our present light apparel and on a short, leg-stretching hike after motoring from Death Valley 80 miles in the east, our “Old Cronies Expedition” took another prolonged look around, and turned back to the trailhead at Whitney Portal.

It was then that my brother K and I and our friends, George Senner and Bob Johnson, found we were not alone among these rugged mountains.

Coming down through the mists was a lone hiker.

The heavily-bearded, long-haired chap was traveling beneath a bulky backpack that suggested he’d been out for some time. However, the big coil of fiberglass rope tucked beneath a hatchet, a large cast-iron skillet, and soft-toed boots indicated this was no modern-day mountaineer with a fetish for the latest in lightweight travel.

He stopped briefly and we questioned him about his travels. He was originally from Coeur d’Alene, Idaho, and more recently from the Stockton area across the mountains. Tiring of the Bay Area drug scene, he was aiming for a change of pace and was now returning from a trip into the mountains. He talked confidently of his climbing experiences and we enjoyed his free-spirited philosophy before we parted. At a distance through the mist we followed his burdened figure down the trail.

Meeting this hairy 40-ish fellow on the Mount Whitney trail rekindled my thoughts of a half-century earlier – in 1937, a late-summer trip into the Sierras Nevada with my brother K, similarly clad in jeans and carrying unwieldy loads. In that day we also had the trail and the mountain pretty much to ourselves. But in today’s world, had we passed here a couple months later, during the summer’s climbing season, we would have been part of the mountain’s allowable 75 hikers registered daily for the 20-mile roundtrip to the top of Mount Whitney.

How times have changed since those youthful days of the 1930s, during the Great Depression and prior to World War II.

Yet my life since has been a succession of fortuitous circumstances – in many cases being in the right place at the right time and meeting the right person. And though the breaks never made me rich, they provided a bounty of fond memories of fascinating places and events, people and good friends.