The REAL Trickle Down

I doubt we’ll ever see money, wealth, and riches
trickling down from the top to the bottom –
strangely, wealth always seems to get stuck at the top.
But there’s other stuff that trickles down –
stuff I pray will stop. When a leader fans the fires
and gets the hatred burning, and uses fear and lies
– I feel a real yearning for a future that holds
wisdom, love, and understanding – a future with
a fountain of hope at the top – cascading joy
and peace, and creating a rainbow of beauty
on its way down to the base.
– Karen Molenaar Terrell

(Reworked from a post originally published in 2014.)
I’ve never seen The Exorcist, but I have seen that scene with the pea soup and the spinning head – and lately I’ve seemed to encounter a lot of what I would put in the “pea soup and spinning head” category. There have been times, recently, when personalities have seemed to spin themselves out of alignment with the individuals they really are, spewing out all kinds of hell – anger, frustration, jealousy, fear, revenge, hatred, finger-pointing. And I’m embarrassed to say that on at least a couple occasions recently I myself was the spewer – feeling really angry and hurt about someone I felt had treated me unfairly.

It none of it felt good.

But then I came across yet another spewing-spinner on a discussion board, and found myself just stepping back and kind of observing in interested fascination as the pea soup flew and the vitriol sprayed. The pea soup and vitriol had been intended for me, but they were so over-the-top and spewed so high in the air that it simply erupted above the spewer’s head and ended up landing back on her. It didn’t touch me at all. And, standing there on the outside of the mess, it became really clear to me that the spinning-spewing personality was not at all the real individuality of my fellow poster. It was obvious that what I had just witnessed was nothing but a spinning-spewing counterfeit of the real man and woman, made in God’s likeness – made in the likeness of Love.  And it also became clear to me that I had no desire or need to spend my time engaged in conversation with a counterfeit. I was able to step back and move on and find other interesting dialogues that better served me.  I didn’t give the counterfeit the power to push me OUT of a space where I belonged, and nor did I give the counterfeit the power to pull me INTO a space where I didn’t belong. I didn’t have to react or respond to the counterfeit at all.

This encounter with the counterfeit poster helped me come to terms with my feelings of anger and wish for vengeance towards the personality who had treated me so poorly in the past. I had to recognize that the real man is the child of God – that God loves him no less than he loves me – and that God is instructing him, and leading him down his own path in life, with its own lessons waiting for him. And none of that is any of my business.

My business is keeping watch on my own thoughts and actions. Mary Baker Eddy writes, “Christian Science commands man to master the propensities, – to hold hatred in abeyance with kindness, to conquer lust with chastity, revenge with charity, and to overcome deceit with honesty. Choke these errors in their early stages, if you would not cherish an army of conspirators against health, happiness, and success.”

As Paul says, we all must work out our “own salvation.”  It’s rewarding work. It’s satisfying work. And it’s also enough work to fill my moments and my days for eternity. Who has time to worry about working out someone ELSE’s flaws and foibles, when I have enough of my own to worry about?

Enclosed in man’s fences
ears numbered and tagged
their bodies may be owned
by humans (as some humans
might brag) –
but the fences and tags
can’t heed the flow
of Soul, put boundaries
on Love. Still they know
Love, still they show
Love.
– Karen Molenaar Terrell

How many black men have to die for things to change?

What’s on your mind? Facebook asks.
And I look at the little box and wonder
how I can possibly put into words
what I’m feeling right now –
I’m not sure there are any words
big enough for my feelings.
Our world is in desperate need –
in desperate need of love,
of honesty and kindness and wisdom.
And my heart breaks for our world
and for all its creatures.
Love bless us all – each and every one.
– Karen Molenaar Terrell

“Love is impartial and universal in its adaptation and bestowals.”
– Mary Baker Eddy

One of the treasures I found this week was the inscription that a friend wrote to me in a copy of The Book of Mormon that she gave me. My friend, Mary, had been a teaching colleague and my sons’ elementary school music teacher. She was an extraordinary music teacher – but beyond her skills and talents as a music teacher, Mary was one of the most kind and loving people I have ever known. She radiated joy and warmth.

Mary was (and still is) a Mormon (LDS) and her religion is an important part of who she is. When she entrusted me with a copy of The Book of Mormon, I felt really honored and privileged by her gesture. I made an effort to read the book when she first gave it to me, but, for whatever reason, I was never able to get very far into it. Her inscription in the book meant a lot to me, though. The inscription came from a place of love – and, for me, it was the most important part of her gift. Mary wrote:
Dear Karen (and family)
While working with you at Edison School I have come to love and appreciate you for the special person you are.

I tried to think what I might give you to show my appreciation for our friendship. This book is the most precious thing I could think of…

I so appreciate Mary’s courage in giving me a book that meant so much to her. I think she is a wonderful representative of her beliefs and faith.

I enjoy learning how other people see the world. I enjoy seeing other perspectives. I’ve never been one of those people who felt the need for everyone else to believe exactly as I believe about stuff. I figure, in the end, no matter what path we take, we’re all going to end up in the same place, anyway – living in Love.

“A purpose of human life, no matter who is controlling it, is to love whoever is around to be loved.”
– Kurt Vonnegut

My new mask arrived and I was pretty excited to take it for a spin on the Bellingham boardwalk and see how it worked for me. As someone who is hard-of-hearing, masks can be kind of problematic for me: I can’t read people’s lips when they’re wearing masks; people’s voices are muffled through masks; I can’t see the facial expressions that tell me if someone’s friendly or hostile; I can’t send my own smile out into the world to let people know I’m (mostly) harmless; and my hearing aids get all tangled up in the straps of my face masks and start beeping at me. So when my new “smiley face” mask arrived I was hoping that – even though it couldn’t make me hear any better – at least it might let people know that I’m smiling at them…

Unfed, shred, and shed
every humbling shrinking
the ego until it loses all
hold, all importance, all
power and perspective
shifts and what’s true
emerges from the tatters.
– Karen Molenaar Terrell

And maybe someday I will say more about that. 🙂

We have just a tiny scrap of existence here
– a miniscule piece of our eternity –
to love and learn and live
and leave something good behind.
Let’s not waste it on nothings.
– Karen Molenaar Terrell


As I was scrolling through Facebook I saw a post by a friend, sharing that she’d just lost her mother. Her mother had gone into the hospital on a Wednesday and was dead on Sunday. Her death was a surprise to everyone. As I looked through my friend’s pictures of her mom, I realized that her mom was probably about my age. That realization brought me up short. Whoah. And then I thought of the loved ones I’ve lost in the last several years – some of them my age, and some of them younger – and it gave me pause.

I am not afraid of death. I’m maybe afraid of the pain involved in death, but I’m not afraid of death itself. If, as I believe, my consciousness will continue on and continue to learn and unfold – that would be fine. And if death is really the end – that would be fine, too – I mean, I won’t be around to feel one way or the other about it, right? No, I’m not afraid of death – but I hope that what I do here, during my time here, will make a difference for the people who come after me. I hope my time here will mean something, you know? I don’t want to waste even a minute of it on ridiculous rivalries, and empty quests for fame and wealth. I don’t want to waste my life on nothings. Life is too short. We only have one shot at this.

“John says of the world, not that it is wrong, but simply that it ‘passeth away.’ There is a great deal in the world that is delightful and beautiful, there is a great deal that is great and engrossing, but it will not last. All that is in the world, the lust of the eye, the lust of the flesh, and the pride of life, are but for a little while…Nothing that it contains is worth the life and consecration of an immortal soul…You will give yourself to many things; give yourself first to love. Hold things in their proportion.”
– Henry Drummond

(Photo by Karen Molenaar Terrell, taken on a hike in the North Cascades.) 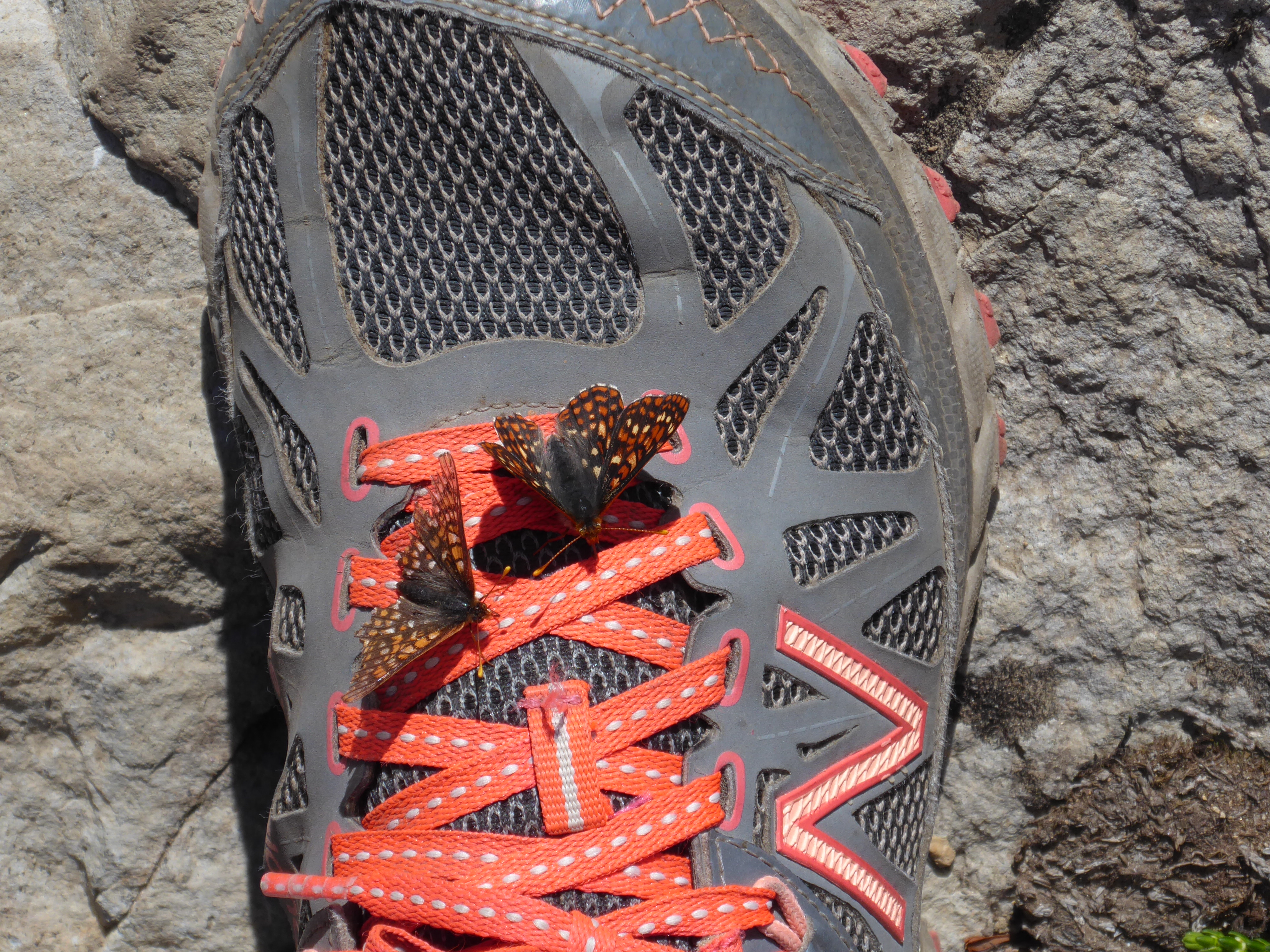 Butterflies on My Shoe

I’m guessing that pretty much all politicians – including the ones we like 🙂 – have found a way to politicize this current challenge. And I don’t blame or judge any of them for doing it – that’s what politicians do. But I think we need to be aware of it – and I think we need to each be honest with ourselves about our own biases, too. Wouldn’t it be great if people just wanted to do right by each other – without concern about political parties and agendas? 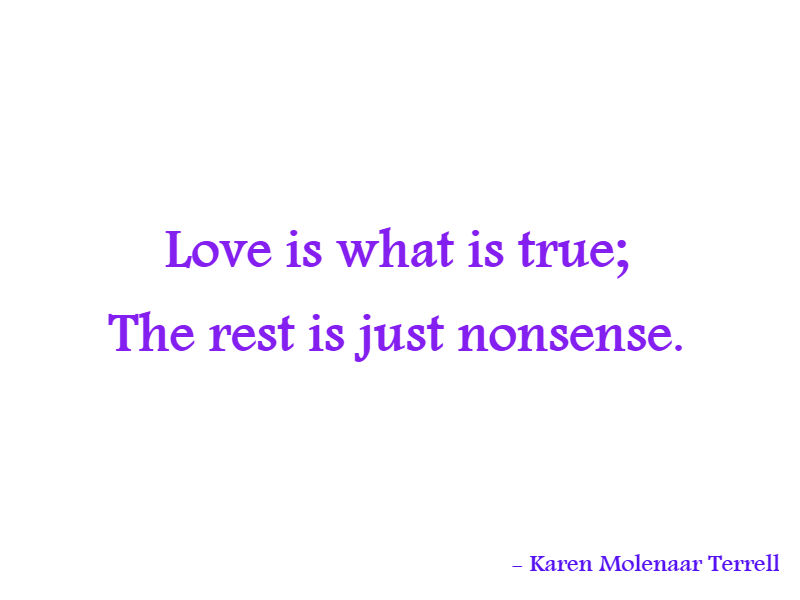