We are not going to be afraid – not one more day, hour, or second. We were made for nobler things.

My friends, the time for Humor is upon us.  If ever there was a need for laughter it is now. If ever there was a place for courageous irreverence it is here. If ever a world was in need of smartassery, it is our world. Gird your funny bones, armor yourselves with laughter, make powerless bullying, bigotry, and bossybritches  bunkum with your good-natured wit and brave hearts.  Go out there and make ’em laugh! 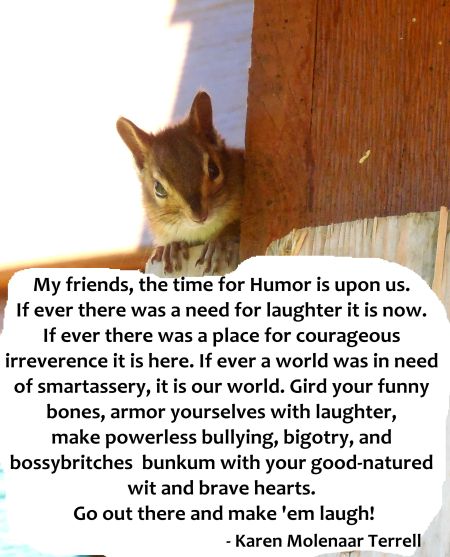 Truth, may Your power and strength fill all space,
light the dark places of the world, lift the veil of fear and confusion,
reveal and transform and fill us with courage.

Made in Your likeness, creation only expresses You.
All we can know is what Truth knows.
All we can feel is what Love feels.
All Creation is the expression of Peace. 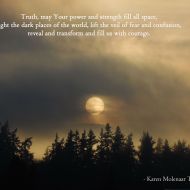 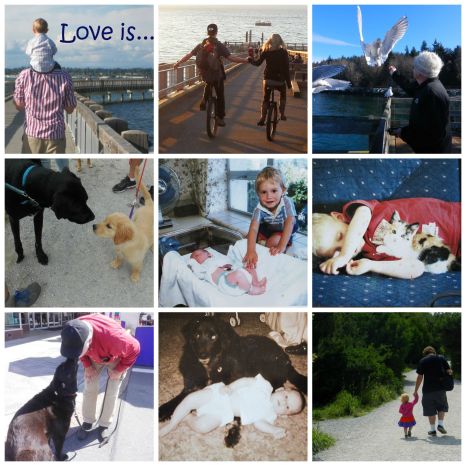 If you have not yet seen John Stewart’s monologue about the doings in Ferguson – I would highly recommend doing so. This – this – is right on!
http://www.upworthy.com/this-might-be-jon-stewarts-best-rant-ever-because-ferguson?g=2&c=upw1

Stewart ends his monologue with these words, “You’re tired of hearing about it (racism)? Imagine how hard it is to live it.”

Years ago, when I was a teenager maybe, I remember seeing a Star Trek episode that showed a man who was half-black and half-white in a struggle with another man who was half-black and half-white – they were enemies because of their color – and I remember looking at them, thinking, “But… they’re BOTH half-black and half-white… what’s the issue here?” And at the end of the episode we finally see that the reason they’re enemies is because one of them is white on the right side of his body, and the other is white on the left side of his body, and… yeah… I remember thinking how absolutely ridiculous it all was for them to hate each other just because they were colored differently on different sides. But it’s absolutely no more ridiculous than hating someone just because they’re all ONE color, and that color is different than mine.

The summer after I graduated from high school – which was about ten years after the Watts Riots –  I traveled with my dad to California. Dad had grown up in Los Angeles, and he wanted to revisit his old neighborhood and see his childhood home once again. As we drove the streets to his old home, I noticed that we were the only white faces in a several-mile radius.

Dad pulled up in front of a little house, and his face lit up – “This was my home!” he said, getting out of the car. I followed him to the front door, where an African-American woman wearing a house-dress and a really surprised look on her face, appeared. Dad explained that he’d grown up in this house and asked if he could come in and take a look around and go out into the backyard where he’d played as a child. The woman smiled graciously and opened her door for us and allowed us into her home. I followed Dad through the house and out into the backyard where there was still the avocado tree he remembered from his childhood. He looked around, said it seemed smaller than he’d remembered it, and started talking about the happy years he’d spent in this yard as a child. He went back through the house, shook the woman’s hand and thanked her for letting him re-visit his old home. Still looking kind of surprised to find these friendly white people traipsing through her house, she smiled back at dad, and told him he was welcome and it was no problem at all.

A block or so later Dad pulled into a gas station to fill the tank up, and a black attendant came out to help us (this was in the days before people filled up their own cars with gas). He had that same surprised look on his face as the woman in Dad’s old house. He smiled, and filled up our tank for us, and, as we were ready to leave, said in a friendly way, a big smile on his face, “Come back again!”

Every time I think of this trip through that neighborhood in Los Angeles I start grinning. I’m pretty sure we were the only white people in years who’d come nonchalantly driving through that section of Los Angeles. I remember the surprised hospitality of the gas station attendant and the woman living in Dad’s old house, and it fills me up with a kind of joy. I remember my dad – totally oblivious to the fact that he was in a part of Los Angeles that most white people might find threatening – happily traveling down “Memory Lane”, shaking hands with the woman in his old house, greeting the gas station attendant with an open, natural smile – and it makes me really proud to be his daughter.

I’m really grateful to have been raised by parents for whom  the color of peoples’ skin was a  non-issue, and kindness towards everyone was considered natural and normal.

I will lift up mine eyes unto the hills, from whence cometh my help. – Psalms 121

When we begin reading a book by an author we’ve never met before, we’re meeting a new friend, aren’t we?

I want to know who’s going to be the first to change course and lead us to peace. 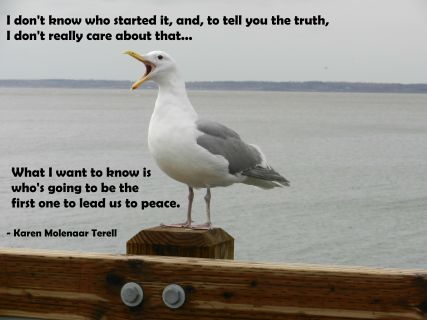 In this morning’s post I invited everyone to join me in finding the magic hidden in the day – and look what I found! – red bark glowing on a tree; a sweet pea peeking out of the pines; I got into conversation with a woman, Flora Lucatero, who is a fitness expert with AdvoCare, and discovered that her dad is good friends with my husband!; and as I was waiting to get my hair done, Daniel, one of the massage therapists, came out to offer me a free hand massage. I said yes. 🙂

sweet pea in the pines 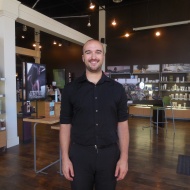 seagull with a beak full of lunch 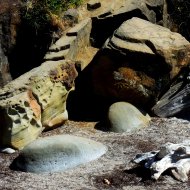 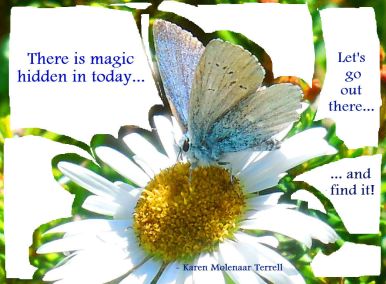