“(Elizabeth Warren) said that when Perez won the party post early this year, ‘the very first conversation I had with him [was] to say, you have got to put together a Democratic Party in which everybody can have confidence that the party is working for Democrats, rather than Democrats are working for the party.’” – quoted by Nick Visser, HuffPost

Well, we have a mess here and that’s for sure. The question is: How do we fix it?

Look, I voted for Hillary Clinton because I felt I had no choice last November. Our only other option was Trump. And. Yeah. Don’t even get me started on THAT one. There was a lot of pressure put on progressives by the Democratic party to vote for Clinton. We were guilted. Those, like myself, who had been Bernie supporters were especially guilted. In fact, some people STILL blame Bernie’s supporters for this mess – which is kind of like blaming the victim of a purse snatching for having a purse.

It’s been bandied around a lot that Clinton lost because she was a woman. But no, I wasn’t reluctant to vote for her because she’s a woman. I would have eagerly voted for Elizabeth Warren, for instance.  I was reluctant to vote for her because I didn’t think the Democratic candidate, or those who counseled her, recognized the need to get out and talk to the disenfranchised, homeless, poor, and unemployed. There was the same old emphasis on getting campaign money from the rich and powerful and sort of ignoring everyone else. This is not to say that I thought the Democratic candidate didn’t care about the poor, but that she seemed sort of oblivious to them, you know?

Progressives need a presidential candidate in 2020 who can be a voice for the middle and lower classes – someone, like Bernie Sanders, who reaches out to the “common folk” and walks their walk with them.

As I see it, we have to either do an over-haul on the Democratic party which is supposed to be representing us, or we throw it out altogether and create something entirely new. But I’ll tell you this:  In the next election, if the Democratic party refuses to transform itself, it should not take my vote for granted. Guilting me isn’t going to work again.

I took my Bernie bumper sticker off my car before I left for work yesterday morning. Bernie Sanders had a noble and honorable run for the presidency. I believe he accomplished a lot that was good and important during his bid for the White House, and I’m beyond grateful to him for that. But, for me, it was never about rooting for a personality – it was always about the ideas Bernie supported. I’ve always tended to follow ideas more than people. People die or they don’t get elected or whatever, but the ideas live on. Let’s not stop fighting for the ideas, okay? 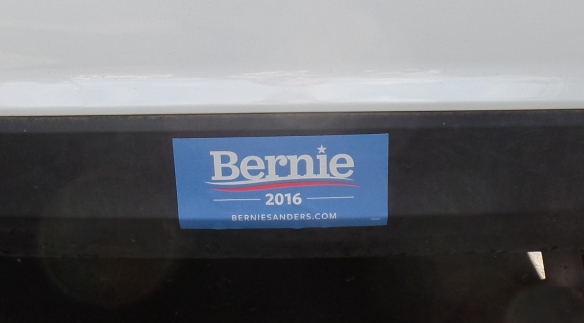