in the quiet stillness of the morning
a lone duck grooms himself on a rock
near the shore of a lake as smooth
as obsidian
gold reflections of the forest swirl
around him as he plucks his feathers
and then leans over to drink
from the lake
and then throws his whole duck body
into the cool water for a morning bath
it is just him and me – me and the duck –
in companionable quiet, enjoying
the peace of the morning together
-Karen Molenaar Terrell

I haven’t had a swim all summer – and it’s been two years since I swam in my favorite simming hole, Lake Padden. So today, as I was driving back from my walk on the boardwalk, I impulsively drove past the exit to I-5 and drove up to Lake Padden. I took off my hearing aids, left my purse and camera in the car, and walked fully-cothed down to the lake, then into the lake up to my knees, then above my knees, and then I dove under the water and came up smiling. I swam out a little ways and then flipped over onto my back and just floated there, looking up at the blue of the sky and the green leaves flickering in the sunshine on the alder trees above me, and I was completely and totally happy. I wasn’t out there long. I swam back to shore and walked, dripping wet, back to my car. I found a couple of fleece jackets that I used to cover the driver’s seat and drove home, grinning.
-Karen Molenaar Terrell

I learned some cool stuff on my walk around Lake Padden today. As I passed a couple of women in animated conversation walking the other direction, I heard one woman say to the other one, “There will be people with their noses pressed up against your window…” and I had to know what they were talking about, right?

So I asked, “Why will people be pressing their noses up against your window?”

And the woman who was the subject of the noses-pressed-against-her-window said that she’s been reading these books by a Canadian author named Louise Penny – and these books are wonderful! And she’s been telling all her friends about them.

The two women looked at each other and finally one of them said, “Well, they’re cozy, yes – but maybe not in the way you’d expect.”

Perfect! I just ordered the first one for my Kindle!

Then as I was stopped on the trail waiting for some really exuberant dogs to be pulled away from each other by their respective owners, I looked up and there was my old friend, Elena! I haven’t seen her for, like, a year! And we talked and chatted and she introduced me to her friend, Katie. That was fun.

A little further on, after I came out of the woods, I stood in a patch of sunshine for a few minutes to warm up my toes – which had started to become numb. A woman approached and I smiled and said, “Doesn’t the sun feel great?!” And she smiled back at me and agreed that it did. She had an accent of some kind – French maybe? – and she had a subtle fragrance that smelled of flowers. I usually try to avoid fragrances – but this one was really lovely – and I asked her what it was. She said it was Kenzo flower perfume. If I ever buy perfume, that will be the one I get.

As I was still standing in the sun, a man named Hans stopped to chat and told me (and I never knew this!) that sun is a sanitizer – and that vultures spread their wings in the sun to sanitize themselves.

Today I was sun-cleansed and I met some really cool people, too.

(Below are some autumn reflections from Lake Padden today.) 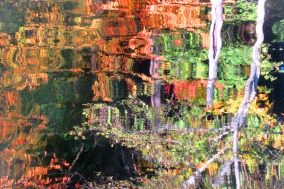 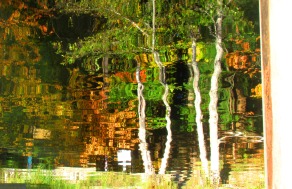