I remember one time, as I was coming down
from a hike, when I got near the trailhead
I saw a couple hikers just starting out who
looked like they had a sense of humor.
“You’re almost there!” I told them. I had
judged correctly: They laughed.

Today as I was coming down from a hike –
just two quick switchbacks from the top –
a sweaty hiker asked if she was close
and I could tell her, “Yes! You’re almost
there! You’re going to make it!” It was
awesome to see the smile come to her face.

Today the hike back down was no bed
of roses, either. It seemed to go on forever.
The further I got down the trail the more
I felt my gait turning into the gait of an old
mariner – lurching from left hip to right hip
as with the rolling waves on the ocean.

I wanted to ask the people coming up if I
was “almost there, yet” – was I almost back
down? But I didn’t.

I found another way. The tired, sweaty
folks panting for breath showed me I still
had a ways to go. As I got nearer
the trailhead the faces weren’t as red,
the breathing not as labored. And when
I saw happy, smiling  hikers still fine-
tuning adjustments on their packs I knew
I was almost back to the beginning.

Ten years ago I started my own religion on the Amazon Discussion Forums. Here is the opening post on the Humoristians thread:
On Aug 20, 2007 2:18:41 PM PDT
Alph Wingoov Karen says:
I’ve decided to create a new religion. People belonging to this religion will call themselves “Humoristians.” Here are the 5 tenets:
1) You must be able to laugh at yourself.
2) You must be able to recognize how ludicrous your beliefs might appear to others.
3) You must want nothing but good for everyone, everywhere in the universe. (Editor’s note: Don’t let this one scare you. None of us is quite there, yet.)
4) You must have a natural aversion to meetings, committees, and scheduled events (as we will be having none of those).
5) You must enjoy the humor of Jon Stewart, Steven Colbert, Tom Lehrer, and Jerry Seinfeld (if you’re a Jerry Lewis kind of guy, you might want to think about starting your own religion – although we wish you nothing but good).

Not long after my initial post a poster who went by the handle “Golden Oldie EK” joined our fledgling church with this comment:

Hello, nice people. I would like very much to join your church. But I do have a question. Is it okay in your religion to also love the comedy of W.C. Fields, Laurel and Hardy, Bugs Bunny, Tweetie Bird, Huckleberry Hound, Quick Draw McGraw, and The Flintstones? Will you please accept my application for membership? (Actually, when I was a little kid, I always thought they should have made Walt Disney god. I mean, after all, here was a man who made the whole world fall in love with a drunken, lying frontiersman from Tennessee, and a little, black rat that wore white gloves and shoes. Church would have been so much fun: The Virgin Snow White and the Seven Apostles; “Our Father who art in Orlando, hallowed be thy name…”)

And if I am accepted for membership, do I have to be immersed in anything?

And this morning I learned, through a message from someone I’d never met, that Randy had died.

I needed a walk.

I went to nearby LaConner to pay my internet bill, and, after paying my bill, was drawn towards the Swinomish Channel on the west side of town. “I’m going to take you on an adventure with me, Randy,” I told my dear Humoristian friend. He’d always talked about visiting me out here. I decided today I’d bring him along with me – in my thoughts, if not in the person.

When I’d gone maybe 100 yards I passed a man coming from the other direction. “Am I walking down a private driveway?” I asked him. He told me yes, and no. It was a private driveway, but the general public had access to it. He told me that if I went further I’d come to a boatyard, and soon after that a trail that split – if I went left I’d find myself in the marshes where the hunters were shooting at birds – but if I went right I’d go on a trail that would take me to the top of a bluff and down to a beach. He suggested I go right. 🙂 I thanked him and…. yeah… kept walking.

A little further on I caught up with another walker. Like me, she had a camera with her, and I noticed her stopping along the road every now and then to take pictures. Not far beyond her there was a “boat graveyard” – weathered old boats piled up along the side of the road with blackberry vines growing over them. I began snapping pictures with my camera, and she joined me. We began talking then about photography, and the boats, and I asked her if she knew about the trail that would take me to the bluff. She did, and offered to take me there.

I’m glad I ran into her because I’m pretty sure I never would have found the trail without her – or I might have found myself on the bird marshes with bird shot flying around me – which would have made for an interesting experience, to be sure, but not the kind I needed today. We introduced ourselves to each other on the way – her name, she said, was Annabelle. She is from Paris, and works as a dance instructor and translator. As we talked we found we had friends in common – which is always fun – as well as a shared political perspective – which is, also, fun.

Annabelle led me to the bluff – which offered an amazing view of the Skagit Bay – and then down to the beach. After we snapped some pictures, Annabelle led me back up the trail and back into “downtown” LaConner – the two of us chatting like old friends the entire way.

Eventually we came to her house, where we hugged as old friends do, and I continued on my journey back to my car parked in front of the place where I’d paid my bill earlier. “How was that for an adventure?” I asked my friend, Randy. “We met a new friend today and found a new beach,” I told him.

As I drove home, with Randy still in my thoughts, I tinkered with the idea of just spending the rest of the day processing Randy’s death – trying to come to terms with it. But then I realized there was more good I could do for someone else today – I could take my Dad for a drive in the sunshine – and while I could still do some good for someone else, I might as well do it. So I put off processing Randy’s death for a little longer, and went to pick-up Daddy for a drive.

But the day – all of it, from start to finish – was just too much to process. I still can’t wrap my head around it – from the deep sense of loss that started my day, to the excitement of meeting a new friend later on. Today was just too big.

Dear friend – I brought you with me on an adventure today. We saw trumpeter swans and boat reflections, we made a new friend, and you talked with me about your latest story, and I talked with you about what I’m working on, and memories of you flashed into my head – your first appearance in the land of Humoristianity, the messages of support you sent me, your comic (and sometimes really profound) interjections on my FB posts, the night we all celebrated Obama’s win together, and the night we all realized that 2017 might not bring us the leader we’d hoped. I cherish all of the writing you sent me – I cherish your book of poems – I cherish everything you shared with me. I feel a deep loss right now. The world is not going to be the same without you in it. My FB posts are not going to be the same without your comments attached to them. I love you, brother.
Karen

Never separated from Life and joy -never isolated. Never unworthy of Good. Never outside Love. You are so loved. 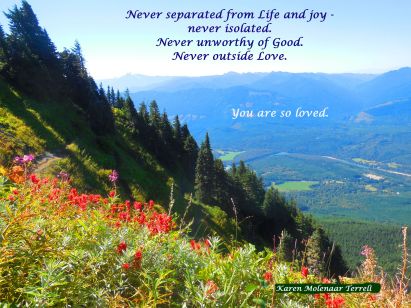 Photo from Sauk Mountain in the North Cascades by Karen Molenaar Terrell.

Photo taken on top of Table Mountain in the North Cascades, by Karen Molenaar Terrell

And I have to tell you – it was MARVELOUS! I had a great date with myself. I put in a Jason Mraz CD and sang along with it all the way to the Heather Meadows parking lot. And once I hit the trail I started singing the theme song from “The Sound of Music” – because when I’m on a date with myself there can never be enough schmaltz. We (me and myself) felt really good up there today – strong and able. When we got to the top of Table Mountain we built a little cairn out of rocks and then sat down for a lunch of crackers and cheese. Then, because we were feeling strong and able, we decided to venture another half a mile or so along the ridge to a nice overlook of the valley below. We didn’t hurry. We took our time, snapped photos when we wanted, stopped and just took in the views when it pleased us.

We saw a marmot scrambling around in the rocks up there, and met some cheerful friendly fellow hikers. On the way down we stopped and moved to the side as a young woman made her way up the trail. The trail is steep, and in places there’s a sheer drop on the other side of it, and the woman looked to be clinging to the rocks when she could.- I got the impression she was a little nervous about the whole adventure. I told her she was almost to the top and it was GORGEOUS up there, and her friend, who was standing next to me, waiting for her, said, “Yes! That’s right! You’re almost there!” and looked at me with gratitude in his eyes. “Thank you,” he said to me, . “Have a wonderful afternoon!” 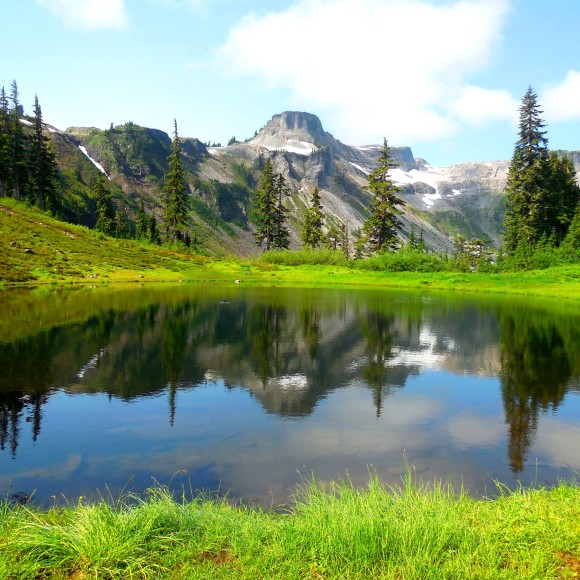 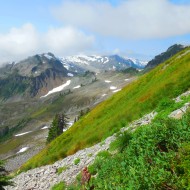 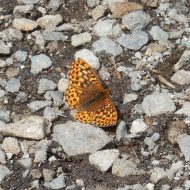