“Willingness to become as a little child and to leave the old for the new, renders thought receptive of the advanced idea. Gladness to leave the false landmarks and joy to see them disappear, – this disposition helps to precipitate the ultimate harmony.”
– Mary Baker Eddy

Little children are expert at leaving the old for the new. They progress from crawling to walking to running to leaping without making any conscious choice to do so. They lay down their toddler toys and graduate to new fun without agonizing over the decision: Does a ten year-old remember the last time she played with her Thomas the Tank Engine, or the last time she she laid down her dolly? Nope. I’m pretty sure not. It wasn’t an event. There weren’t balloons and fireworks and parades for her when she laid down her toddler toys. She just laid them down and cheerfully moved on to something else.

The changes and progress don’t stop with childhood, do they? I mean… we don’t stop learning new things or exploring new ideas or laying down old toys when we hit twenty. Or thirty. Or forty. Or fifty… right?

We really have no choice but to progress, you know?  You and I can no more go backwards than an oak can become an acorn, or a butterfly a caterpillar.  Grow we must.

Years ago I heard a lecture titled “Grow We Must” given by a Christian Science teacher named Harvey Wood.  I don’t remember much detail from the lecture anymore – but I do remember Harvey talking about asparagus. He said that just because we can’t see progress in our lives, doesn’t mean progress isn’t happening, and he used asparagus as an example of this – Harvey said that we don’t see the asparagus growing under the concrete in our driveways,  but once it starts growing nothing can stop it – it’ll break right through the concrete in its journey upwards. (If you don’t believe this – google “asparagus growing through concrete” and take a gander at the interesting photos that pop up.)

Entering a new year is symbolic of change and progress.  I’m looking forward to seeing what changes and progress we’ll find in 2023.

A flower unblown, a book unread,
A tree with fruit unharvested;
A path untrod, a house whose rooms,
Lack yet the hearts divine perfumes.
A landscape whose wide border lies
In silent shade ‘neath silent skies;
A wondrous fountain yet unsealed,
A casket with its gifts concealed;
This is the year that for you awaits,
Beyond tomorrow’s mystic gates.

I’m thinking about the stone that Love has been rolling away from my heart over the years – the ego, blame, self-will, guilt, fear, anger, selfishness, sense of being “put upon” and treated unfairly – and I’m so very grateful for the progress so far – so grateful for the light that’s reached me – so very glad to be alive – to be able to experience the birdsong and blossoms and sunshine of an Easter morning.

Thoughts upon a reading a dialogue between two of my friends:

Jeepers. Let’s give each other grace
and space
and the opportunity to grow
at our own pace
None of us is stuck in one place
mentally
We’re all evolving, changing,
re-arranging
moment by moment by moment.
No need to judge here.
No need to preach
all sanctimonious to each
other.
The person I was yesterday is gone
and so is the person you were
and so is the person next to you –
and what’s the point
of judging a person who
no longer exists?
-Karen Molenaar Terrell

Let us sing of Easter gladness
That rejoices every day,
Sing of hope and faith uplifted;
Love has rolled the stone away…
– Frances Thompson Hill

I’m searching for glimmers of hope these days – those “thousand points of light” a former president was always talking about. And I’m seeing some! I thought I’d take a moment to share some of the glimmers I’ve seen…

“…Now, with the past few days, friends from all over the world have been calling and calling and calling me. Calling me distraught and worried about us as a nation. One woman was in tears about America, wonderful tears of idealism about what America should be. Those tears should remind us of what America means to the world. Now I’ve told everyone who has called that, as heartbreaking as all this is, America will come back from these dark days and shine our light once again…”
-Arnold Schwarzenegger

“Recently, I was offered the opportunity to receive the Presidential Medal of Freedom, which I was flattered by out of respect for what the honor represents and admiration for prior recipients. Subsequently, the tragic events of last week occurred and the decision has been made not to move forward with the award. Above all, I am an American citizen with great reverence for our nation’s values, freedom and democracy. I know I also represent my family and the New England Patriots team. One of the most rewarding things in my professional career took place in 2020 when, through the great leadership within our team, conversations about social justice, equality and human rights moved to the forefront and became actions. Continuing those efforts while remaining true to the people, team and country I love outweigh the benefits of any individual award.”
-Bill Belichick

“… I think if there is one thing that we can have after the last month in this country, it’s hope. You know, as an outsider growing up in England, I used to look to America as this beacon of light and possibility. A place where anything can happen, a place where you’d be lucky to work. A place where many people that I knew used to fantasize about living here. A place that gives an individual more opportunity than they would get elsewhere but cares for their fellow man. Today people across the world would have looked at these pictures from Washington and wondered, ‘what on earth has happened to this great country?’ But I truly believe, and make no mistake, that they know that the America that they admire still exists. They know that the America that so many aspire to will be back. It’s just been hijacked by a lunatic and his crazy army for the last four years…

“…on those same steps, where that mob fought and pushed past police, Joe Biden will be sworn in as the president of the United States.”
-James Corden

“It’s difficult in times like these: ideals, dreams and cherished hopes rise within us, only to be crushed by grim reality. It’s a wonder I haven’t abandoned all my ideals, they seem so absurd and impractical. Yet I cling to them because I still believe, in spite of everything, that people are truly good at heart.”
-Anne Frank

“Progress is the law of God…”
-Mary Baker Eddy

Like Loading...
We were shopping at Fred Meyer’s today and I came upon a new version of “Monopoly” (the board game). This version is called “Monopoly: Cheater’s Edition.” It came out in June, 2018. Here’s what the game is about: “Follow, bend or break the rules to win the Cheaters Edition of the Monopoly board game. Cheating is part of the game. Don’t get caught. This Monopoly game includes a plastic handcuff unit that ‘chains’ cheating players to Jail space. Cheat cards encourage players to cheat and which cheat to attempt. Complete a cheat to get a reward; fail a cheat and pay the consequences.”
And it struck me that this new version of Monopoly is pretty representative of where our nation is right now. Our current president has shown us it’s okay to lie, cheat, bribe a foreign nation, and brag about “grabbing pussy” – so long as you don’t get caught – and then even if you DO get caught it’s okay – so long as you can threaten and bully your way out of it. Here is a man who created a fake university to collect tuition money from students hoping to make better lives for themselves. Here is a man who has refused to pay his workers. Here is a man who threatened to withhold funds approved by congress to an ally nation in order to make a political rival look bad. Here is a man who’s called our Constitution – the document he’s pledged to protect – “phony” because it kept him from making money from his resort. Here is a man who, from day one, has been dismantling our environmental protections.
Some folks have suggested that we need to quickly stop the trial of this president so we can “unite” again as a nation. But I disagree with this sentiment. Ending this trial quickly is not going to help “unite” us. Ignoring this president’s misdeeds, trying to shuffle them under the carpet, and letting him continue to get away with lying, cheating, and bribery is NOT going to help our country move forward – and it is certainly not going to help our nation unite and heal.
– Karen Molenaar Terrell

“Though error hides behind a lie, and excuses guilt, error cannot forever be concealed. Truth, through her eternal laws, unveils error. Truth causes sin to betray itself, and sets upon error the mark of the beast. Even the disposition to excuse guilt or to conceal it is punished. The avoidance of justice and the denial of truth tend to perpetuate sin, invoke crime, jeopardize self-control, and mock divine mercy.”
– Mary Baker Eddy

So here’s something… I woke up this morning with that scene from the M*A*S*H movie in my head – the one where Margaret Houlihan is trying to take a shower and Hawkeye Pierce and Trapper John raise the shower curtain on her in front of an audience of laughing men. M*A*S*H was one of the biggest movies of the early 1970s – nominated for all kinds of awards, including best picture. I didn’t see it when it first came out – too young – but I remember enjoying it, for the most part, when I finally saw it a few years later. I never did like that shower scene, though – it made me really uncomfortable – I thought it was mean-spirited. And now here we are in 2018. I’m thinking that scene might not play well in theaters, anymore. And I’m really glad about that.

We have made progress.

Our world is in labor.
It’s painful to watch
and painful to go through.
But there’s a birth going
on here. Or a rebirth.
Something beautiful is going
to be born of this. I feel it.
– Karen Molenaar Terrell 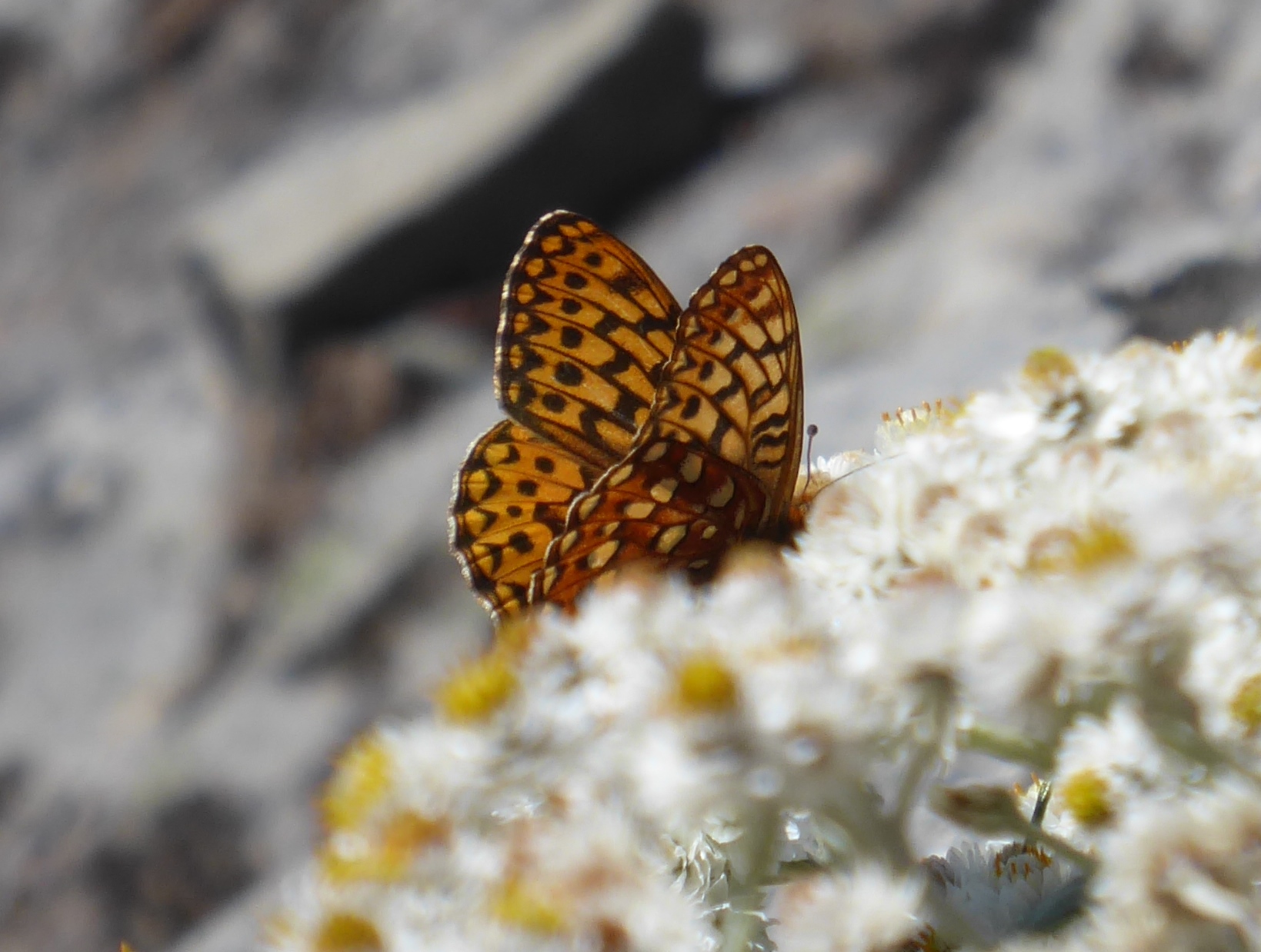 An alpine butterfly flits among the flowers on Table Mountain. Photo by Karen Molenaar Terrell.

Do what’s decent before it’s considered “normal” – because someday it will be.

“Progress is the law of God…”
– Mary Baker Eddy 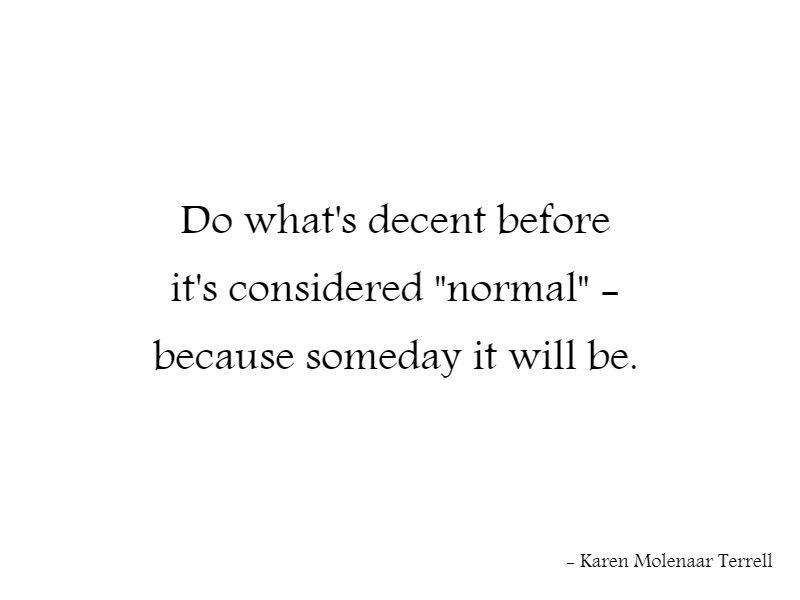