“Karen…as you deal with the results of the election, please know that you ran an ethical, honest, community-driven, and student-focused race. What a fine woman you are. I am grateful my sons had you for a teacher…and I am glad we are friends. You are an incredible example of what humankind can be.”
–  Kathy

Okay – THAT brought me tears.

Rich won. I could not have run for school board with a nicer person. I guess if there’s one emotion I’m feeling right now it’s relief. I’m so glad it’s over! And I’m so glad I put my name in and had this adventure. I’ve met so many wonderful people on this journey. I feel huge gratitude for the support I’ve felt from my community the last six months. I am truly blessed.

I spent most of the day taking down campaign signs. It was a cleansing; a closure. Almost every sign had some memory associated with it that brought me a smile – new friends met; old friends who stepped forward and asked if they could plant signs in their yards; memories of strangers waving and smiling at me as I hammered stakes into the ground. I found one or two signs that I hadn’t even known were out there! That made me grin. 🙂

If I had to do it over, would I still put my name in the race? Yes. I needed to run for this office. I wouldn’t have met all the amazing people I’ve met if I hadn’t done this. If I hadn’t run I would have missed out on a wonderful opportunity to move outside my comfort zone and challenge and stretch myself. I have this sense that there are other reasons I needed to run, too, that I haven’t even realized, yet.

Do I wish I’d won? No. I think I was meant to go down another path. I think there’s something else I’m supposed to do – something that’s tied in with running for this office, but not necessarily with winning. I’m not feeling any kind of disappointment or sadness at all in the election results.

“I love you Karen. Every person you encountered along this journey is a little better because they got a glimpse of you.”
– Linda

Yeah. THAT one made me teary, too. 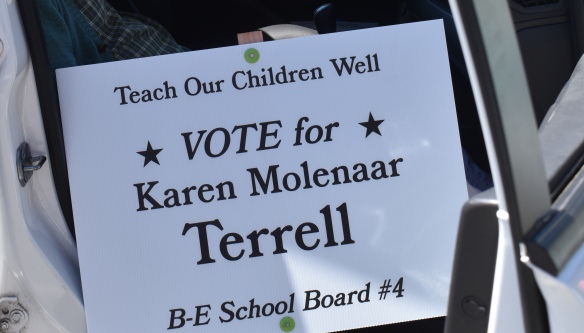 What an adventure this has been! Running for school board has given me the opportunity to connect with amazing people in my community; and it’s given me the opportunity to stretch and grow, listen and share, and force myself to do things that I was scared to do (the public forum!!!). However this turns out, I’m so glad I put my name in this race. I’ve realized that my greatest fear of all was getting complacent and settled and stuck. I’m not done, yet, you know? There’s still so much to learn and do and be!

It started in June and now it is autumn
We’re in the ninth inning, at the very bottom
The signs are looking a little bedraggled today –
duct taped, leaning, and shredded along the way
But the adventures I’ve had! The people I’ve met!
Being in this race has shown me I’m not done, yet!
The pamphlets and ballots have come in your mail
And however this turns out – there’s no loss and no fail.
– Karen Molenaar Terrell

Participated in my first-ever public forum tonight as a candidate. I was so nervous – I think we all were – the other school board candidates and I were laughing about that before it started – I don’t think any of the other candidates had done one of these before, either. But we all survived and came out smiling and shaking hands and nobody threw tomatoes at us or anything.

It was a good night.

The League of Women Voters hosted the event at our local public library. All the school board candidates gave opening and closing speeches and in-between we were asked questions from the audience.

Here’s my opening speech:
It’s great to be here tonight with my teammates on this adventure. All of us – Bill, Holly, Rich and I – are running because we genuinely want to help our community. What I can bring to the board are my years of teaching experience – right now the board doesn’t have anyone with a teaching background on it. I have a Bachelor’s in Education and History from Washington State University, and a Master’s in Literacy from Walden University. I was a teacher for more than 30 years – for 20 of those years i was in the Burlington-Edison school district and taught at three of the schools there – Allen, Edison, and West View, the district’s dual language school. And for the last seven years I’ve taught at Emerson High School, the alternative high school in Mount Vernon. I think my teaching experience would add something positive to the board.

And here’s my closing bit:
I have a passion for teaching and learning. As I contemplated my retirement from teaching last spring I realized I still wanted to be a part of education – and it occurred to me that I could bring my experience and love for teaching to service on the school board.

My mom passed on two years ago. She was the youngest of ten children – eight of them daughters – and she was the only female in her family to get a university degree. Education was very important to her. My brothers and I knew growing up that there was an expectation we would go on to college. My mom worked as a teacher’s aide for many years and impacted a lot of young lives – she knew how to reach the struggling students. I still hear from some of her old students about how much my mom meant to them. I think Mom would be proud of me for running for school board – win or lose – I think she’d be proud that I put my name into the race.

I think I could bring a lot of good to the school board.

Thank you for inviting us all here tonight to share our visions with you.

I was really hoping all the candidates would be there that night so I could finally meet them and make new friends and shake their hands. If I lost (the most likely scenario, in my mind) I’d graciously congratulate the winners and wish them luck in the general election, and then go home and begin my retirement. If I made it to the general election myself I’d … well, I didn’t actually have that scenario figured out in my mind. I mean – what were the odds, right?

There were four of us running for this position, but the only other candidate to arrive at the courthouse that night was Rich, the incumbent. I was so glad to see him! We shook hands and chatted for a bit – talked about where we’d learned we shouldn’t put signs (do not put signs along state highways, or in parks – they will be confiscated), and our campaigns – this was the first time Rich had actually had to run against other people, so it was all kind of new to him, too. Bill was there, too – Bill is an incumbent, running for another school board position (he was the only candidate for his position to show up). There were also some candidates there for a local mayor’s race, and positions on the hospital board, and their supporters and families were there to celebrate with them if they won, and bolster them up if things went the other direction. It was a wonderfully convivial atmosphere. That was the thing that struck me most about it – everyone was so friendly and cheery – even the folks who were running against each other. And it struck me that this is how elections SHOULD be.

The position I was running for – school board director – is a non-partisan position, and the people on the school board have to work as a team to make decisions – no one person holds all the power and can make decisions by himself/herself. I think this is great. I got in a lovely conversation with a commissioner for the local port authority and we talked about that for a while- his position is non-partisan, also. He said he never endorses other people, and he never asks for endorsements, either, because he doesn’t want to be beholden to anyone or any party. His words really resonated with me. Right now our nation is so polarized between right and left, conservatives and liberals, that it was really refreshing to be able to talk to someone in a way that wasn’t divided between this thing and that thing.

When the votes were counted, Rich handily mowed all the rest of us down in the primary, but I managed to come in second and will be going on to the general election with him.

I had fun that night. I met some really wonderful people whose whole motivation for running seems to be to serve others. School board members and port commissioners don’t get paid for their work – it’s all voluntary – and I really enjoyed hobnobbing with other folks who have that service mentality.

Here are a couple pictures from that night…
(Photos by Scott Terrell.) 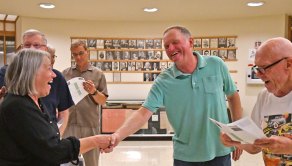 So what happened was… one day during lunch I walked down to the courthouse in the drizzle, squeeked my way across the lobby (my shoes decided to show off to the long line of people waiting to get their vehicles registered), and announced to the ladies behind the election counter that I was going to run for office. They smiled and pointed to the next office over, and there I was greeted by the mother of one of my former students who asked me (and how did she know?!) if I was going to run for school board. She set me up in front of a little computer, I typed in my name and pushed a couple buttons, and – just like that! – I was a candidate!

Here’s my statement for the voter’s pamphlet:
I’ve been a teacher in Skagit County’s schools since my husband and I moved here 34 years ago. I taught in the Burlington-Edison School District from 1992-2012. For the last seven years I’ve taught at Emerson, a nonprofit alternative high school in Mount Vernon. Recently, I wrote a health supplement on teen drug abuse for an educational publishing company. Working for the publishing company gave me an opportunity to recognize the challenges students and teachers face today in education.

As an educator my mission has been to help my students build a solid foundation of knowledge and skills they can bring with them into the future; and to help them see the power they have to make the world a better place. I retired from teaching in spring of 2019. I’d like to bring my teaching experience with me to the Burlington-Edison school board.