Yesterday I “kidnapped” Dad, 98, and Moz and brought them to my place to give Dad a quiet space and a big table to work on his painting for the auction. I told Dad that he was painting for his dinner. 🙂 He nodded his head and said “Okay.”

I’d brought to my house some of Dad’s brushes, a sponge, a packet of watercolor paper, and a couple of watercolor trays I found in his apartment. Dad’s favorite brush wasn’t in the brushes I’d brought over – but he found one that would be “alright.” There was also no yellow in the watercolor trays. But my youngest son had left some of his art supplies here when he moved out, so I rummaged through his art box and found a little travel watercolor box that had a small square of yellow in it, and Dad made do with that.

Dad worked really hard. Painting takes a lot of concentration. There are problems to be solved – balancing out this area with THAT area; making the foreground darker to bring depth and dimension to the background; finding the just right color to brighten everything up.

Dad and Mom were at my place from about 3:00 to 7:30 – and, except for a small break for dinner, and a short nap, Dad spent that entire time working on his picture. And look! He got ‘er done! I’m really proud of him. 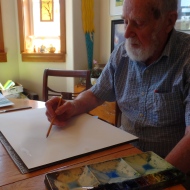 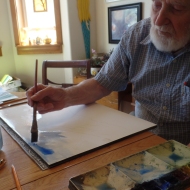 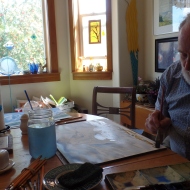 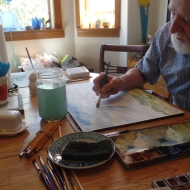 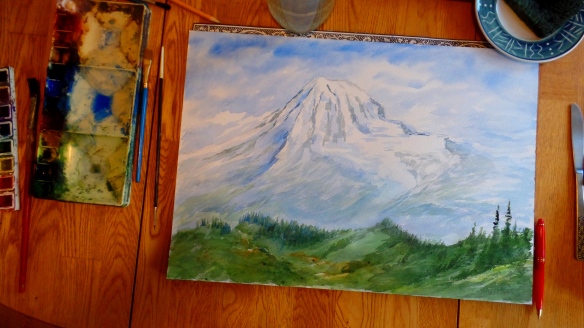 Every good painter paints what he is. – Jackson Pollock

Dad turned 97 at the end of June, and he and Mom (87) moved into a new home in a retirement community the next week. I’ve been so proud of the way they’ve forged ahead into this new adventure.

Last weekend I helped them unpack and unbox things in their new apartment – hung up pictures on the wall, cleared off the desk so Mom has a place to get organized, and cleared off the dining room table for Dad – showed him the box I’d packed for him full of watercolor paints, brushes, pencils. He said, “I need to paint again.” And then he filled up a cup with water, picked the brush he wanted, and THIS happened… 🙂

For years Mom had been telling us about her rh negative blood and her adopted great-great-great-someone who might have been Tatar, or descended from Genghis Khan, or possibly Basque Reptile Aliens. Finally, in an effort to solve the mystery of the great-great-great I bought Mom one of those DNA kits. After I bought the kit for Mom, I noticed that Dad looked pretty interested in being tested, too. So last week I ordered a kit for him.

The kit wasn’t supposed to arrive until Tuesday. This was a bummer because I have Saturday through Monday off every week, and if the kit didn’t arrive until Tuesday I’d have to wait a whole ‘nother week to bring it down to Dad. I started monitoring the kit’s progress across the country via its UPS tracking number and on Saturday found that it had made it to Seattle in the early morning. The odds of it getting to my local post office in time for me to pick it up while the post office crew was still there seemed pretty low – and if I couldn’t pick it up Saturday I’d have to wait until after work on Tuesday to get it because Monday was a holiday. So I did the Karen-thing. I threw out my happy hopes to the “cosmos” – thought of all the wonderful post office workers who were handling the kit and how efficient they all were, and how if they knew my need they’d want to help me – and drove to the post office on Saturday morning with an expectancy of finding Good waiting for me there. And it was! The kit had arrived!

As I was getting ready to leave for my folks’ my son, Xander, told me he’d like to go with me to visit his grandparents.  And so began our epic adventure.

The drive to my parents’ home went well – the express lanes through Seattle were open and we arrived at Dad and Mom’s in a couple hours. The DNA test involved spitting into a tube. Dad took care of that pretty quickly, and we moved onto other things. Xander, who has recently discovered his gifts as an artist and poet, and also recently discovered from a Wikipedia article that his grampa painted the “highest painting in the world” (my dad, Dee Molenaar, painted a watercolor at 25,000 feet on K2), began asking Dad about his painting technique. So Dad got out his watercolors and painted a picture for Xander on the dining room table. Watching Dad paint was oddly soothing – the sound of the brush on the paper, the stillness and quiet as Dad focused on his work – Xander and I both found ourselves getting relaxed and drowsy as we watched the painting unfold in front of us. There was something very precious in the bonding that was happening between the artist born at the beginning of the 20th century (in 1918) and his grandson-artist, born at the end of the 20th century (in 1994).

When it came time to go, Xander signed one of his books for his grandparents, and Dad signed his painting for Xander, we gave Mom and Dad tight hugs, and then got back in the car to begin our adventure home.

It had begun to rain.

By the time we reached I-5 the rain had become a deluge. It was dark, visibility was low, and people were hydro-planing by us at 80 mph. There were flashing red and blue lights coming from the side of the freeway on the right, and more flashing on the left. Xander said, “This is scary.” Something about the way he said it struck me as funny, and we both started laughing.  Then, still laughing, Xander shared his belief that people living in America today have become everyday daredevils.  Driving I-5 has become an “extreme sport” – we all race down the freeway in our narrow lanes – and if we cross over the lines we could be toast. We depend on everyone else to know what they’re doing, but “there are 16 year-olds driving down this freeway,” Xander pointed out – and everyone acts like this is all normal. Xander’s observations about the absurdity of modern freeway-driving cracked me up. The laughter helped ease the tension I’d been feeling.

I felt we were meant to be exactly where we were at that moment, and I felt we really could depend on everyone else to be exactly where they needed to be, too. The day had begun perfectly with the arrival of the DNA kit; the visit with my parents had been precious and dear; and now I was enjoying shared laughter with my son.  There was no place for anything less than perfect in this perfect and epic adventure.