It is Father’s Day – and it is also my dad’s 102nd birthday – a double whammy. When Dad was 99 and lying in a hospital bed with a UTI, angry that he wasn’t being allowed to leave, he announced to my husband and me that he was “going to live to be 102!”

He almost made it, too. He died January 19th of this year – just five months short of his goal.

A lot has happened in those five months. If my dad were suddenly to reappear here today and look around at what’s happened to our world in the last five months I’m not sure what he’d make of it all. I know he’d be celebrating some of it – I know he’d support the Black Lives Matter movement and be glad to see the progress that is being made towards equality for all people. He’d probably be baffled to see everyone walking around in face masks – but I think he’d like the smiley face on mine. 🙂 He might be frustrated by the way elderly folks are being isolated from the community and he probably wouldn’t like not being able to have a lot of visitors. But – as he always managed to do – he’d make the best of the circumstances – he’d rejoice in the good, patiently wait for the bad stuff to pass, and remain hopeful about the future. He was born at the end of WWI and the beginning of the Spanish Flu pandemic; survived the Great Depression and service in WWII; and survived 10 days in a small tent in a blizzard at 25,000′ on K2 – he wouldn’t be daunted by 2020. Pffft.

I miss him. As I look at the photo of him, standing next to my mother on their wedding day, I feel him with me. I feel them both with me. Giving me courage. Telling me it’s all going to be alright. We’ll make it through this.

I sit down at the table next to Dad.
Dad: Are we going now?
Karen: Going where?
Dad: Going to your house.
Karen: I stopped by to see you on my way home from school.
Dad: (Nodding.) Oh. (Pointing to a photo of a man in the newspaper.) Have you ever met him?
Karen: (Looking at the picture. It’s a photo of an actor named Ventimmiglia.) No. (shaking my head.)
Dad: How do you pronounce that?
Karen: Ven ti mi glia maybe?
Dad: (Nodding.) Do you know where my hat is?
Karen: (Nodding.) Yes. (I go into Dad’s bedroom and fetch it for him. I show it to him and put it on his head.)
Dad: Where did you find it?
Karen: It was on top of the lamp in your room.
Dad: Where?
Karen: On top of the lampshade.
Dad: Oh.
(I grab Dad’s hand and he squeezes my hand and grins at me.)
Karen; I love you, Daddy.
Dad: And I love you, Karen.
Karen: How are you feeling?
Dad: I’m okay. How should I be feeling? I’m good.
Karen: Tomorrow will be the first day of February. Spring is coming soon.
Dad: Yeah!
(For a while we don’t talk. He is busy folding the newspaper this way and that way. I am busy watching him. I watch his hands and think how they saved me from drowning when I was a toddler. I think of how those hands have belayed ropes on some of the highest mountains in the world, and probably saved other lives. I look at his eyes and try to imagine all they’ve seen in his 100 years. I feel myself tearing up, wondering how much longer he’ll be here. Dad looks up then and smiles at me.)
Dad: I love you.
Karen: I love you.

(More stories like this can be found in Are You Taking Me Home Now?: Adventures with Dad.) 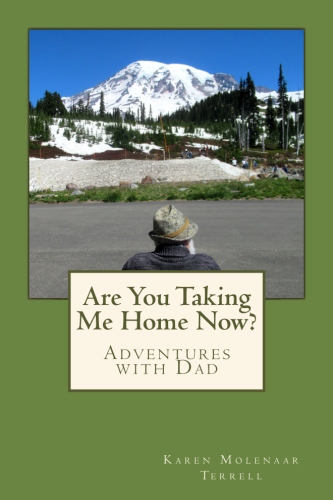