I took a drive up to Bellingham yesterday. I decided to avoid the freeway and stick to the back roads. I had a yearning to meander.

Mindy Jostyn’s album, In His Eyes, played on my CD player as I drove down roads arched and lined in gold. Autumn leaves drifted gently down around me. There was no hurry here.

The title song of Jostyn’s album began playing, and I thought of Moz as these words filled my car –

In His eyes, you’re a fire that never goes out
A light on the top of a hill
In His eyes you’re a poet, a painter, a prophet
With a mission of love to fulfill
Outside there’s a world so enchantingly strange
A maze of illusion and lies
But there’s never a story that ever could change
The glory of you in His eyes…

Moz had loved that song. When she’d been lying on a hospital bed in my living room – her last day – I’d played Mindy Jostyn’s CD for her and I remember how, during that song, she’d gotten quiet and still – her breathing not labored – and her eyes had focused as she listened to the words. There’d been peace in the room.

And there was peace now in my car as the song played through the speakers. I could feel Moz with me. I felt surrounded by her expression of Love.

“The structure of Truth and Love…” is part of Mary Baker Eddy’s definition for “CHURCH” in the Christian Science textbook. And, listening to Mindy Jostyn’s song, I felt Moz and I coming together to have our own church service in my car. Under the golden trees. On a quiet country back road. 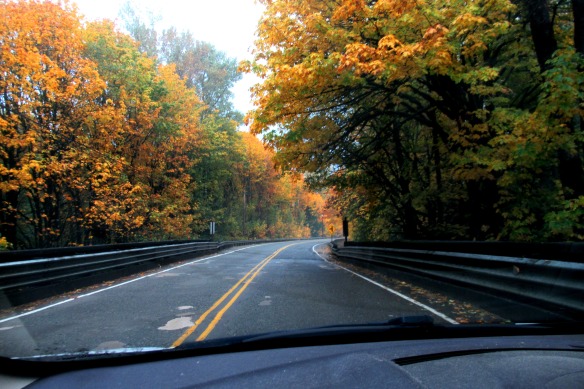