Finally got back up to Bellingham for my boardwalk walk this morning. (I haven’t been up there for maybe a week – the snow and cold has kept me on the neighborhood roads for my walks.)

I was sitting in the car, getting ready for my drive, and I started looking around for a CD to listen to on the way. My eyes went to the pocket on my driver’s door and I spotted a CD there and pulled it out. It was still hermetically-sealed in its plastic – hadn’t been opened, yet – and I have no idea how or when I came upon this CD. Did I buy it? Did someone give it to me? How long ago?

The writing was too small for me to see what kind of music this was or who it was by…I was intrigued. I unwrapped it and stuck it in the CD player and this man’s voice came through the speakers, singing one of my favorite old Christian Science hymns: “He leadeth me, He leadeth me; by His own hand He leadeth me…” (Joseph H. Gilmore)

I started crying. Love knew exactly what I needed at just that moment.

Later on – when I could look more closely at the writing – I found the CD was made by a musician named Andrew James. Bless him.

Music connects us one to another, doesn’t it?

“Whatever inspires with wisdom, Truth, or Love – be it song, sermon, or Science – blesses the human family with crumbs of comfort from Christ’s table, feeding the hungry and giving living waters to the thirsty.”- Mary Baker Eddy

This thought came to me this morning – and I think there actually might be something profound in it – but I ain’t sure. I guess I’ll post it and then think about it some more. If any of you has any thoughts you’d care to share about “waiting” – I’d be most appreciative. 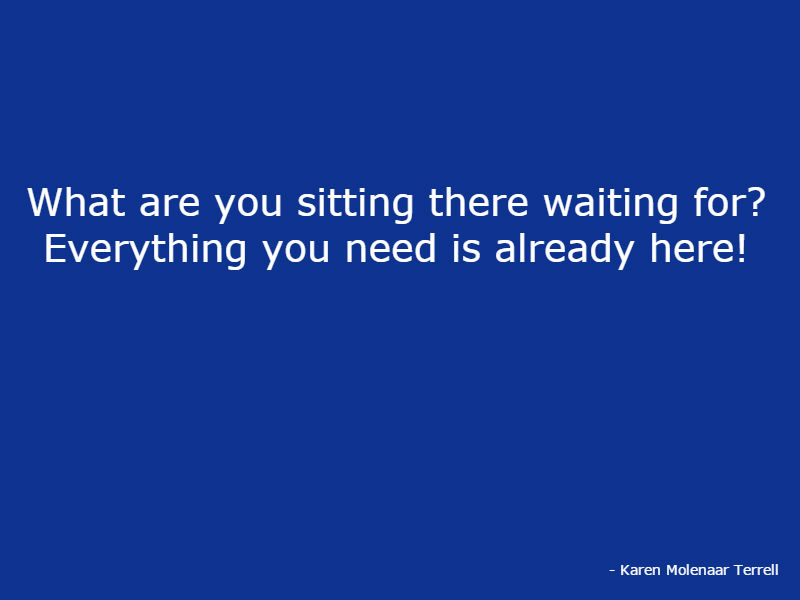 Take no thought for your life, what ye shall eat, or what ye shall drink; nor yet for your body, what ye shall put on. Is not the life more than meat, and the body than raiment? Behold the fowls of the air: for they sow not, neither do they reap, nor gather into barns; yet your heavenly Father feedeth them…Therefore take no thought, saying, What shall we eat? or, What shall we drink? or, Wherewithal shall we be clothed? …for your heavenly Father knoweth that ye have need of all these things. But seek ye first the kingdom of God, and his righteousness; and all these things shall be added unto you. – Matthew 6

…when has a little financial shortage ever stopped Good from happening? – Karen Molenaar Terrell (from The Madcap Christian Scientist: All Things New) 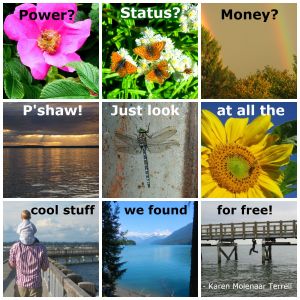 This morning I woke up without plans, a schedule, an agenda, or expectations – my thoughts completely open to whatever treasures the day might have in store for me…

Soon I found myself at the dining room table, thinking this might be a good time to work on taxes. I worked my way through wages, interest income, and the tuition deduction, and began working away on royalties. I added up print book royalties, e-book royalties, income from my husband’s photography, and from mine, and then it occurred to me that I’d sold nine audiobooks during 2013. I figured I’d probably made a buck off each book, and it had all been automatically deposited in my account at some point. It almost didn’t seem worth the effort to track it down, but being the responsible, conscientious tax-paying citizen I am, I went in search of some record of my audiobook royalties. I finally dug up this humongo envelope – a foot long and almost a foot wide – that I’d received from the audiobook publishing company back in October, and never opened. I thought maybe there’d be some record of royalties in there. But when I opened it up I found a check for $27 waiting for me! It had been issued on October 11th, and would be void in 180 days. After a quick calculation I realized it was within days of being voided out – if I hadn’t started working on my taxes this morning, I never would have found that check in time!

I felt like I was looking at an unexpected gift – I had the same feeling you get when you find cash in your pocket that you forgot you put there.

I went to the bank, cashed the check, and bought myself some geraniums and marigolds for the flower boxes on our back deck. And now I’m sitting here, looking out on our deck, admiring the cheery newly-planted little flowers smiling back at me.

That little $27 check totally tickled me today. And it reaffirmed for me what I’ve already discovered – I can’t always know what form Love’s supply of good is going to take for me, but I can trust that there will always be something to tickle my heart. This week the tickling came in the form of an unexpected check, and a wave returned from a passenger on an Amtrak train as it zipped by, and meeting a new friend while I was looking for agates on a beach in Oregon, and getting a call from an old never-before-met-in-the-person friend saying she was going to be in Vancouver in two days on business and asking if we could meet for the first time face-to-face. It has been a great week.  I expect it will be a great week next week, too. 🙂

“To those leaning on the sustaining infinite, to-day is big with blessings.”

This has simply been an amazing year.  As some of you know, last year I felt led to leave my job of 20 years and launch myself into The Great Unknown. I knew it was the right thing for me to do, but I have to admit that I didn’t enter this new chapter of my life without some trepidation. One of my chief concerns was what the future would hold for my sons, one of whom was attending university, and the other of whom would soon be graduating from high school.

The youngest son was accepted to the same university the eldest attends, but he cancelled his enrollment, thinking there would be no funds to pay for his education this year. He decided he’d go to a local community college instead. Now there’s absolutely nothing wrong with pursuing one’s education at a local community college – but what did feel wrong to me was the reason for the choice to cancel the enrollment at the university. The choice had been based on a sense of limitation – a fear of lack – and all summer this fear seemed to permeate the atmosphere in our home.

Weirdly – considering it was my decision to leave my job that was the cause of the fears among my family members – the fear that attached itself to my loved ones almost completely disappeared from my own thoughts within a very short time after making my decision.  My thoughts suddenly open to all the good surrounding me, good began unfolding beautifully in my life. Unexpected opportunities arose for me – wonderful experiences and blessings that I never could have foreseen poured into my life.

But still… I had concerns for my youngest. He took the human steps he needed to take to prepare for the new school year – he visited local community colleges, took placement tests, had his AP test scores sent out – but at one point, about a month ago,  he confided in me that he really wished he was going to the university with his older brother.  There was a feeling of not-quite-right-ness about the direction his life seemed to be going.

What an opportunity for spiritual growth! I had to work on putting aside my own willfulness and fears about my son’s future, and trust that whatever path he took, or direction he went, he would have whatever experiences and supply he needed for his life to unfold in a harmonious and healthy way. I had to remind myself, daily, that good isn’t dependent on some specific form – on some specific school or choice. Good isn’t dependent on money. It’s here and now. And finally I reached a place, in my own thoughts, of acceptance for whatever choice my son made. I let it all go. It was, I realized, his life – and I needed to allow him to have his own life experience without interference from me.

Then something really wonderful happened.

A letter came in the mail from the university my son had originally wanted to attend, offering him a sizable chunk in grant monies to attend school there! But he’d already cancelled his enrollment.
Would it be too late for him to re-enroll? My son and I spent the day making phone calls and sending off emails  – emails that bounced back to us, and calls to people who weren’t available.  I began to feel anxious again.

The next morning, needing to find peace about it all, I asked my husband if he would make some calls to the university before he left for work – I needed to get away for a couple hours and take a walk. I told my husband that if he couldn’t get through, I would pick up where he left off after I returned.  He agreed to make the calls, and I took myself to my favorite walking path along the bay and opened my thoughts up to all the good around me.  Sailboats bobbed happily around on the water, dogs played in the waves, the boardwalk was full of smiling faces, and giggling children, and sunshine sparkled down on all. Once again, I acknowledged that good isn’t dependent on some specific form – this school or that school, this job or that job, this locale or that one – good is everywhere, always available, without limitation or boundary. Wherever my son is, good is there. But it also occurred to me that there was absolutely no reason why he shouldn’t be re-admitted to the university – nothing could stand in the way of a right idea. I knew no matter what happened everything would be alright.  In fact, I knew, everything already WAS alright.

When I returned from my walk, my husband told me that he’d called the university, been connected to a woman in the admissions office, and that our son had been re-admitted to the university.

Within the day he was signed up for Orientation, had reserved a dorm room, and was officially enrolled at the university. A week later he and his older brother pulled out of our driveway, the car loaded with books, school supplies, bedding, clothes, and other assorted sundries, heading towards a new year of adventure and learning at the university.

This is the day the Lord hath made;

Be glad, give thanks, rejoice;

Stand in His presence, unafraid,

In praise lift up your voice.

All perfect gifts are from above,

And all our blessings show

The amplitude of God’s dear love

Which every heart may know.