I’ve been struggling to find some way to respond. I’ve been tempted to stay off the internet, dodge every source of news, isolate myself in every way from the world. But I realize none of that is going to make this go away. So. Yeah. Here we are.

When Ahmoud Arbury was chased down a suburban street in Georgia and shot in broad daylight – that was murder – plain and simple. He was innocently jogging. He had committed no crime. He had done nothing wrong. The only reason he was chased and killed was because the people who killed him didn’t like the color of his skin.

The murderers were (finally- months later!) arrested. And now there’s a group on Facebook called “Christians Against Google” that supports Ahmoud Arbury’s killers. There is so much wrong with that I can’t even wrap my head around it. “Christians”?!! What part of Jesus’ simple instruction to “love your neighbor” is so hard for his professed followers to understand?

The group’s description says: “These 2 God fearing men were only trying to protect their neighborhood” and “this man… did not comply with simple commands.” WHAT THE HELL?!!! Ahmoud Arbury was under no obligation to “comply” with the commands being given by these racist sociopaths intent on killing him – and if you’ve seen the video you know it wouldn’t have helped Ahmoud Arbury to “comply,” anyway.

The inhumanity, the hatred, the insanity, the sheer brutality and senselessness of it – there is no way for this to be justified. No excuse for Ahmoud Arbury’s tragic murder.

You know, this stuff didn’t start with Trump. The greed, the racism, the me-firstness, the bullying, the dishonesty, the corruption, the mean-spiritedness – that stuff has been a part of our society and politics for a long time – the only difference in the last couple of years is that it’s come out in the open – people almost seem proud of their hate and greed and dishonesty now. And to see all of that being played out in front of us – in the open – is disheartening, yes. But… here’s what gives me hope: It seems to me that if there’s been a rise in acts of hatred, there’s also been a rise in acts of kindness in the last couple years – people seem, to me, to be more conscious and deliberate about kindness.

Alrighty. That’s where I am right now. Carry on then… 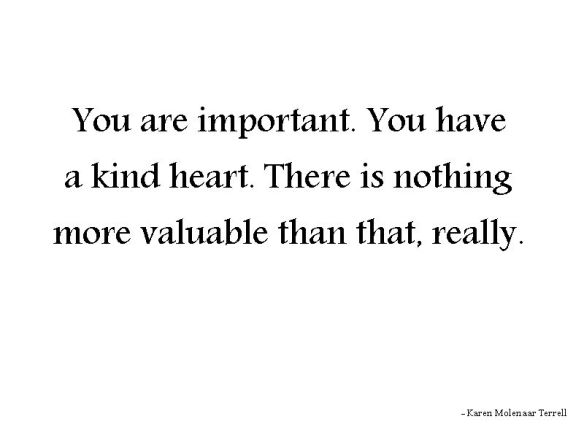 I can’t believe we’re still debating stuff in 2018 that we should have moved beyond long ago.

No, it’s not alright to separate children from their parents at the border. No, it’s not alright to torture ANYone or thing. No, we shouldn’t be taking from the poor to give to the rich. Yes, we should be caring for our planet – it’s the only one we’ve got. No, we should not be denying people their rights to life, liberty, happiness, and prosperity because of their race, religion or non-religion, ethnicity, gender, or sexual orientation. Are these things we really even need to debate? Sheesh.

“I say to you today, my friends, so even though we face the difficulties of today and tomorrow, I still have a dream. It is a dream deeply rooted in the American dream. I have a dream that one day this nation will rise up and live out the true meaning of its creed, ‘We hold these truths to be self-evident, that all men are created equal.’ I have a dream that one day on the red hills of Georgia, sons of former slaves and the sons of former slaveowners will be able to sit down together at the table of brotherhood… I have a dream that my four little children will one day live in a nation where they will not be judged by the color of their skin but by the content of their character…

“…and when we allow freedom to ring, when we let it ring from every village and every hamlet, from every state and every city, we will be able to speed up that day when all of God’s children, black men and white men, Jews and Gentiles, Protestants and Catholics, will be able to join hands and sing in the words of the old Negro spiritual: ‘Free at last. Free at last. Thank God Almighty, we are free at last.’”
– Martin Luther King, Jr.
from the “I Have a Dream” speech

King’s words are still relevant today – and we are, again, living in a time when we need to recognize “the urgency of the moment.” Our nation is at a crossroads, isn’t it? All the slime and ooze hidden on the bottom of the pond has been stirred up and is coming to the surface – corruption, racism, bigotry, and greed are being exposed to the light. Now it’s up to us to decide, as a nation, what we’re going to do about it. The decisions we make now – the direction we choose to go – is going to determine our fate.  I’m thinking we should choose equality, freedom, and justice, right?

I keep hanging onto the memory of that night – the night of the election – when I saw a shooting star streak across the sky and the voice said, “Trust. Everything is happening as it needs to happen.” But the voice didn’t tell me what was to come would be easy, or that it wouldn’t involve some effort, time, sweat, tears, courage, and prayer…

“Peals that should startle the slumbering thought from its erroneous dreams are partially unheeded; but the last trump has not sounded, or this would not be so. Marvels, calamities, and sin will much more abound as truth urges upon mortals its resisted claims; but the awful daring of sin destroys sin, and foreshadows the triumph of truth.”
– Mary Baker Eddy

Adventures of the Madcap Christian Scientist

“I believe that unarmed truth and unconditional love will have the final word in reality. This is why right, temporarily defeated, is stronger than evil triumphant.”
– Martin Luther King, Jr.

From my friend, Nikkita –

I cried
By Nikkita

I cried today.
I cried for my family, my town, my country.
I cried for our world.
I cried for people I love. People that love me.
I cried as I listened to our president justify hate.
Justify bigotry
Justify Racism.
Justify terror.
—
I wept today.
I wept as I saw my cousin, my beautiful biracial cousin, crumble in my arms.
I wept as she asked why, why, why
I wept because I don’t know why
I wept as she asked if he, her president, cared at all
As she asked how he could defend them
Defend those bigots
Defend those racists
I wept as she asked wasn’t she worth loving
Worth saving
Worth caring about by the man who holds the highest office in our land.
I don’t know why.
I don’t know.
—
I screamed today.
I screamed in my head, so loudly, because my vocal chords can’t.
I screamed as the president tore down reporters
I screamed as people defended his behavior
I screamed as the replays of disgusting people chanting “Jews Will Not Replace Us” filled the screen.
—
I cried today.
I cried because I don’t recognize my government
I don’t recognize my nation
Anymore.
I cried because these are the groups, the very same groups,
That believe my Jewish grandmother
My black cousin
My gay best friend
My disabled friends
And me
Should be cleansed off this earth and
The president defended them.
—
They aren’t good people.
Never good people.
For if you are not a Nazi
But can protest with a Nazi
And chant their chants
And stand and say nothing
You are worse.
Worse than the Nazi
Worse than the KKK
Worse than their hate
Because you claim to not be filled with hate
But you stood there. You stood there.
And you said nothing.
—
I wept today
For my country, my world.
I wanted to smile
To be joyful
Full of love
And light
And peace.
But not today.
Today I cried.
Tomorrow?
Well, tomorrow
I FIGHT BACK.
—
I will fight hate with love
Bigotry with acceptance
Racism with inclusion
Ethnic cleansing with diversity
And terror with peace.
—
I FIGHT BACK
I will fight back with my voice
My actions
My deeds
My heart.
—
I FIGHT BACK
By saying no
By insisting that my government say no
By demanding equal rights
Equal love
Equal care.
—
I FIGHT BACK
By refusing to let this go
We can’t let this go
We can’t normalize this hatred
We can’t pretend.
Pretending got us here.
Pretending he would change
Got us a president
Who defends Nazis.
—
I cried today
Tomorrow I might smile
And the next day I might laugh
But not today.
—
Today I cried
Because tears and outrage
Horror and Disgust
They are the only correct reaction.
I cried today.
Tomorrow I fight.
The next day I love
And the world WILL change
For good
Because
You and me
And everyone good
Will not forget
Ever.
In memory of Heather Heyer, H. Jay Cullen and Berke Bates