I can’t know exactly what went through your mind that day –
you’ve been reluctant to step into the limelight and say –
you’ve been humble, wanting to fade quietly into the background.
But the impulse that led you to step to the front on January sixth –
the impulse that made you run towards hell –
when our government was on the verge of being felled
by its own people – continues to give me hope for our nation.
Maybe for you the choice was no choice –
you could no more have run away from the terror of that day
than the sun can stop shining. You simply did what heroes do
without question or thought.
You are a miracle. You represent the best in us.
-Karen Molenaar Terrell

It has been a year and a half since Mom died. Dad had been in the hospital, suffering from delirium caused by an infection, when Mom passed. When he was released from the hospital after her death, he never returned to the apartment they’d shared together before he went into the hospital. He, basically, woke up from his delirium to find himself in a new home and without his companion of 62 years. I know he’s been working hard in the last 18 months to make some sense of it all. His courage since Mom’s death has been awe-inspiring for me to witness. I always knew he was brave – his mountaineering adventures are proof of that – but I never realized the amazing depth of his steely inner resolve until the last year and a half. I think I finally understand now how he survived those weeks on K2. I finally understand why so many people look on him as a hero. He is one. A genuine real life hero. And he’s my father.

The power was out yesterday and some of the traffic lights weren’t working. But something really cool happened: At each traffic light I witnessed people being courteous to each other, taking turns, allowing those cars stuck on side streets to come into the flow. At one point the driver of the car to the left of me stopped to allow a car on a side street to enter traffic. In order for the car on the side street to enter, I had to stop, too, though – we all had to work together to help the car on the side street get into the flow.  There was no one directing traffic – no one standing in the intersection telling us when to go. But somehow we managed to take care of each other.

What an incredible opportunity to find out who we are as human beings.

Every single one of you who ventures forth into a new day in America is a hero. It takes courage just to walk out the front door these days – and you’ve got it. Go out there and shine like the sun shines. Love like that’s all you’re made of. You’ve got this.

“To those leaning on the sustaining infinite, today is big with blessings.”
– Mary Baker Eddy 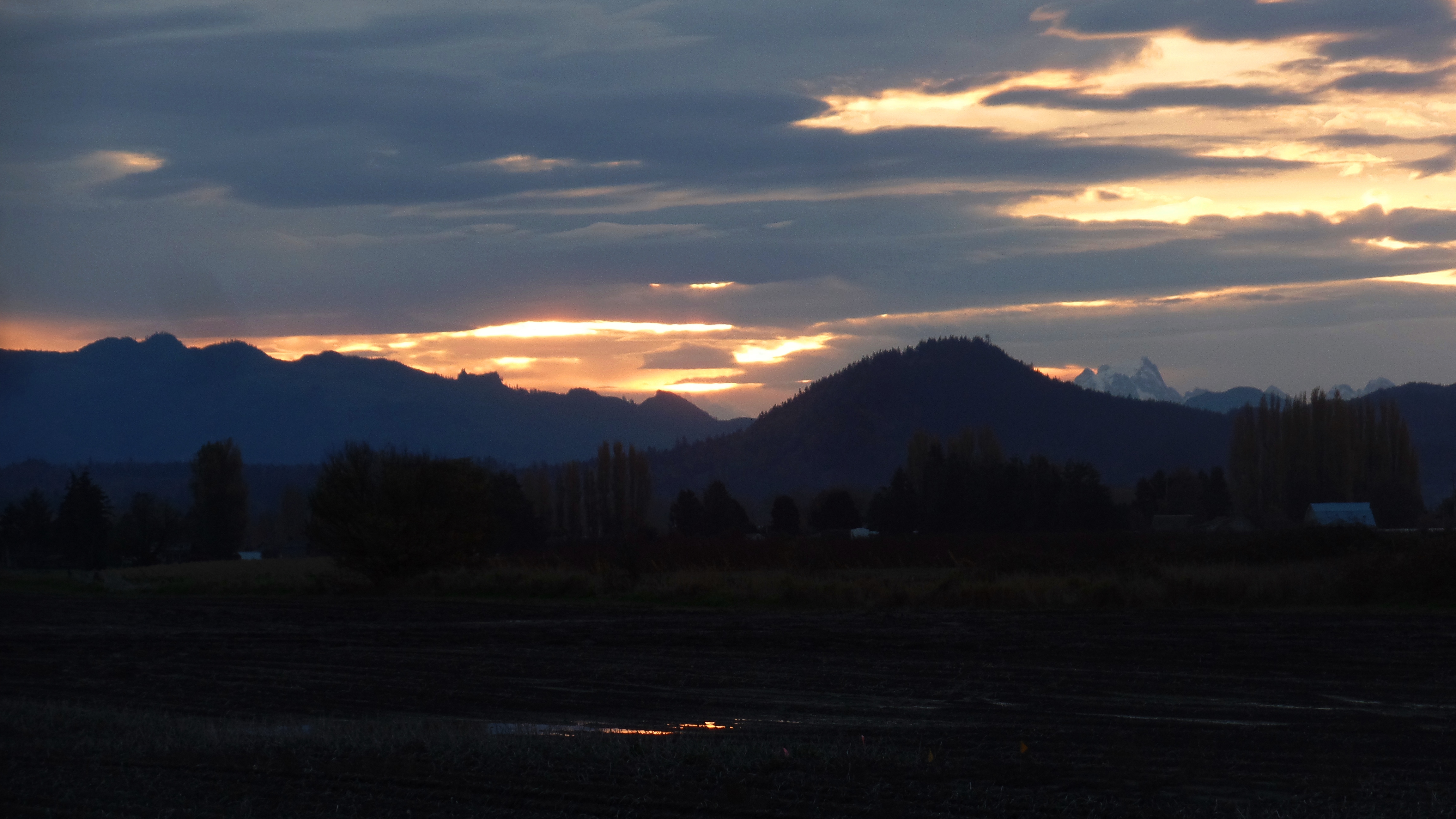 The sun rises over a field in LaConner, WA. Photo by Karen Molenaar Terrell.

Yup, I am still up. Before I go to bed I wanted to send out a message to you to tell you how very glad I am to know you are on this planet with me. If you’re feeling discouraged or ascared or alone – know that you have a whole community of people who are working for the same things you’re working for, who care, and who are blest by your kindness. You have a reason to be here – a purpose. You are here to love and to spread laughter. You are a hero. So don that cape and those tights. Put on the Groucho glasses and play the kazoo. You have work to do, my hooligan friends. Go out there and spread your magic. I mean.You know. After you get a good night’s sleep. 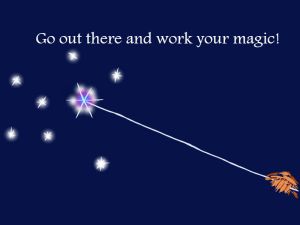 We are surrounded by heroes. Yesterday I discovered one at the local espresso stand. Or… I guess he discovered me, really. I had just ordered a mocha, and was waiting at the window to conclude the transaction, when I heard someone say in a gentle voice behind me, “I don’t want to embarrass you, but you have a tag on your pants.”  I turned around and saw this young man smiling at me, sort of apologetically. “You have a… ” – he stretched his fingertips out from each other vertically – “…a tag on your pants.”

When he stretched his fingertips out from each other length-wise, I knew he meant I had one of those long plastic strips on my jeans that tells what size they are – I had just bought those jeans the day before and hadn’t realized the plastic strip thingy was still affixed to them. This was embarrassing in so many ways – one of the chief ones being that my jeans size is not something you would ever hear me bragging about, if you know what I mean – and I certainly wouldn’t knowingly walk around with it affixed to my pants for everyone to see.

I started laughing and peeled off the strip. “Thank you!” I said, holding out my hand to shake his hand. And then I discovered that he knew how to shake hands the proper way! – shake, roll the thumbs over, bump fists, and end with a retreating finger-wiggle. He was surprised that I knew how to do this and, by way of explanation, I told him I teach at an alternative high school, so… yeah… “And that’s all the more reason to thank you for telling me about the plastic strip on my pants! Can you imagine how that would have gone over at the high school?!” He and I both laughed together then at the image that conjured up for us.

The barista made a joke about me wanting to leave the plastic strip on my pants to show off that I had new jeans. I pointed out that the plastic strip gave the size of my jeans which is not something I’d really like to advertise to the general public, and she and my hero chuckled about that. “But we’ll just keep my jeans size between ourselves, right?” I asked my new friend. He nodded in the affirmative, and assured me he would never tell – my secret was safe with him.

By this time my mocha was ready and my bill paid. My hero and I introduced ourselves, and I learned his name was Pablo. I asked him if I could take his picture and write about his noble and heroic self in my blog, and he good-naturedly agreed.

“Thanks for taking care of me this morning, Pablo!” I said, grabbing my card and pack. And he smiled his hero’s smile and wished me a good day. 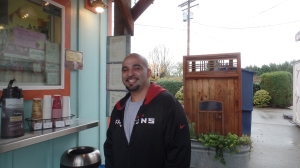