“Know thyself, and God will supply the wisdom and the occasion for a victory over evil.”
– Mary Baker Eddy

There have been several times in my life when I have had the opportunity to learn more of who I am by being put in a position where I needed to respond to violence, or the threat of violence.

– Once I was waiting to pick up my son from a movie and I saw a young man sitting on top of another young man, pounding his head into the parking lot pavement. Without thinking, I walked into the ring of young spectators watching this happen, and tried to pull the attacker off his victim. I yelled, “Stop it! You’re killing him!” And one of the spectators said, “Lady, you better be careful. This guy could have a knife!” I turned on him and asked him why he was just watching, why he wasn’t trying to help. And then I put my hands on my hips and announced, “I AM A TEACHER!” – like I was some kind of super hero or something and that was going to make them all stop. The guy who was smashing the other guy’s head into the pavement sort of paused then, and looked up at me for a minute, and then went back to doing what he was doing. There were other people there – outside the circle, watching while this was happening – but at one point I remember looking up to see another parent – the mother of one of my son’s friends – had stepped into the circle with me. I remember being amazed by this and she said, “Well, I wasn’t going to let you be in here alone!” That’s always stayed with me – that this woman I didn’t know well had stepped into the circle with me to back me up. Anyway. Pretty soon the police came out and took care of it all. Afterwards I realized what I’d done was pretty foolish – but I was glad I’d done it anyway. I’d learned something about myself that night.

– I remember feeling some fear as I drove to participate in the local BLM rally last June – there’d already been some stories of guys with pistols and rifles showing up at other rallies to intimidate the protesters and I’d heard rumors that there’d be some of these guys at this rally, too. But I remember coming to terms with that as I drove there – praying for the safety of EVERYone there – protesters and gun folks alike. When I pulled into the parking lot, sure enough, there were guys with rifles slung over their shoulders and holsters with guns and assorted other black metal things tucked away in belts and pockets. I got out of the car, pulled up my mask, and made eye contact with a man with a rifle – raised my eyebrows and pointed to my “TRUTH JUSTICE KINDNESS” sign – and I remember he kind of smiled and said, “We hope so.” And in that moment – maybe when I realized these guys with the weapons were the ones who were really scared – all fear just vanished for me. The rally was a peaceful one.

– And this is a story I haven’t shared until now, but I think now is the right time. One time when I was working at a nonprofit school another teacher came out of her office – still talking to the student that was in her office as she approached me – and handed me the note you see below: “We are not SAFE.” I’m going to skip everything that happened after this, except for this one part: At one point I had a clear choice – one choice brought sure safety for myself, but left my colleague on her own (this is the choice I know my colleague wanted me to make for myself) – and the other choice brought possible danger to myself, but meant I would stay by my colleague through this experience. I took a deep breath and chose to stay with my friend. I’m so grateful I made that choice. I don’t know how I’d live with myself if I hadn’t.

And I’m happy to say that’s what it all comes down to for me now – I’m no longer so concerned about how other people feel about me – these days I’m more concerned with how I feel about MYself. I know I won’t always make the “right choice” – I still mess up majorly sometimes – but I’m learning more and more I can trust myself – and there is a certain power in that, you know?
– Karen Molenaar Terrell

For all the brave parents out there who are helping their children with high school math:

After a Day Spent Teaching Math

Function notation of a linear equation
Integer, whole, irrational, and real –
What would it cost to buy this meal?
Multiplying this, and factoring that –
How many cats would fit on that mat?
Parallel and perpendicular lines in a plane
When you subtract you lessen,
When you add you gain.
Exponents and polynomials and parabolas and lines
Angles and triangles, tangents and sines
Distributive, reflexive, transitive props
Substitution really just means doing a swap.
Slope intercept form and Pythagorean theorem
how many people would fill the museum?
The minimum’s the low point, the maximum’s the high
Mathematical equations are as easy as pi.
– Karen Molenaar Terrell, twitchy-eyed sometime math teacher 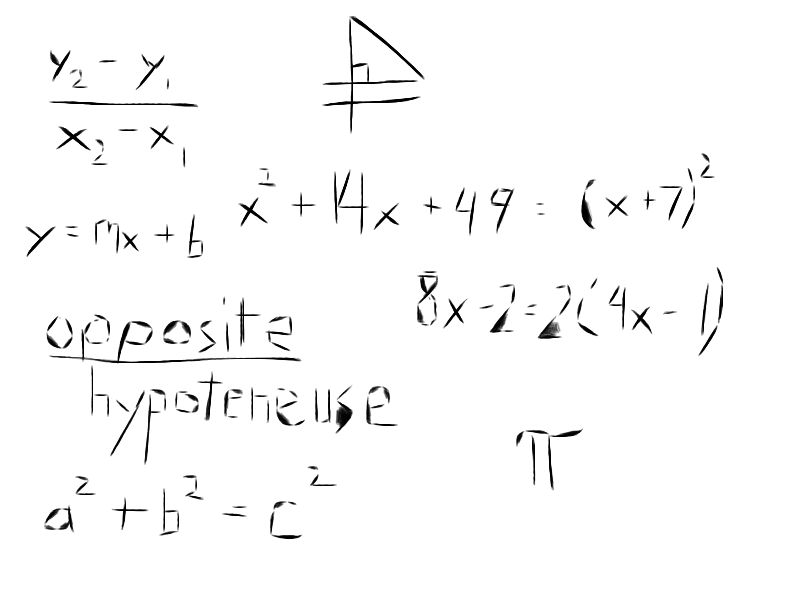 Some wise guy turned around my campaign sign at the espresso stand so’s all you could see was the blank back of it. And I found myself cracking up. I could just picture it: I pictured a man with a baseball cap on his head, a cup of drip coffee in one hand and a rascally grin on his face – slyly reaching out and pulling my sign out of the dirt, giving it a stealthy 180 turn, and re-planting it. And – maybe it’s my background as a middle school teacher – but the idea of that just cracked me up.

It reminds me of my first day teaching eighth graders at Allen School: My partner, Teresa, and I both started in the B-E school district at Allen Elementary School the same year. Teresa taught science and math to the youngsters and I taught social studies and English. We were both dazzled by our students right from the start – I remember half-way through the day we both popped out of our classrooms at the same time, looked down the hall at each other, big grins on our faces, and said simultaneously, “I love these kids!”

At the end of the day we were outside the building, waving good bye to our new students as they loaded onto the buses, and we suddenly – again, both at the same time – looked at each other and said, “Where’s ____?!” We realized we were missing one of our students.

Without needing to say anything more to each other (and this is probably when I recognized my new partner and I had some special cosmic connection) we both hauled off in the same direction – towards the side of the school – rounded the corner and found our missing 8th grader in the process of lighting up a cigarette. Simultaneously, we yelled, “Busted!” He grinned at us and we grinned back. And that was the end of that. We established right from the get-go who he was dealing with that year, and we also established that we genuinely cared about him and he wasn’t invisible to us.

Finding the sign turned around this morning made me flashback to that scene at the side of the school all those years ago.

Ahem. And no – I did not leave the sign turned with its backside to the road. Good try, though. 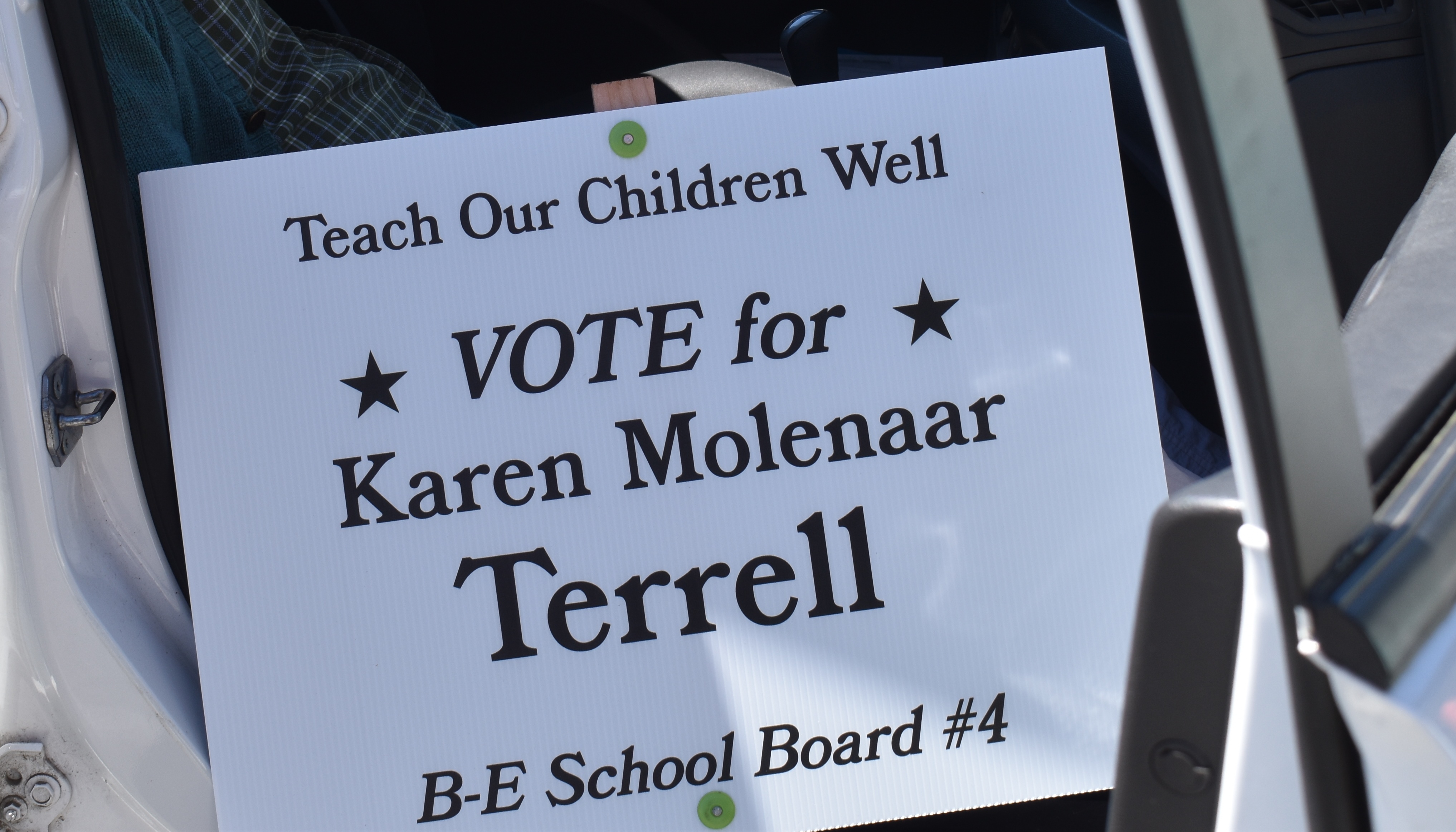 I retire from teaching this week. I’ve been clearing out my space at school and came upon some notes and messages from my days as a teacher at Allen and Edison and West View that have brought tears to my eyes – I’m getting all choked up here. I have been blessed with such wonderful students in my career – kind and courageous and dear. I want to share some of what I’ve found this week – I want my students to know that their notes and kind words and art have stayed with me and meant a lot to me. I’ll never forget you.

“Don’t cry because it’s over. Smile because it happened.”
– Dr. Seuss